When Kristina Mariswamy received her postal ballot in Houston, Texas, in the US, she had given up hope that it would reach Malaysia in time. 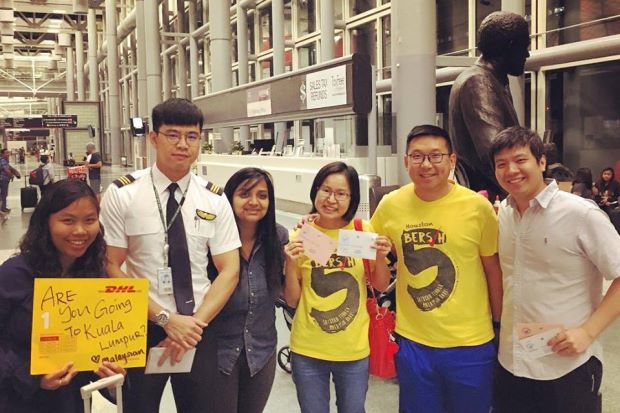 Houston is 13 hours behind Malaysia and she received her postal ballot at 1pm (US time) on Monday (May 7), which would have been 2am, Tuesday (May 8), in Malaysia.

It seemed to be mission impossible to get her ballot back in time to the returning officer (RO) at 5pm on polling day (May 9) for it to be counted.

However, at 5pm (US time), Kristina, 31, got a message from a Malaysian person she did not know on Facebook, asking her if she was still trying to get her ballot home.

She was added to a chat group where they were trying to figure out all the options that were available.

“They suggested we just show up to the airport for the 1am flight to Kuala Lumpur via Taipei and try our luck.

"So we showed up and held up signs.

"Right before the final check-ins were over, lo and behold, one of the pilots turned out to be a Malaysian, on the way home to vote!” she said in a Facebook post that has since been shared widely.

Altogether, there were four of them at the airport trying their luck and their ballots were supposed to reach Selangor, Negeri Sembilan, Kuala Lumpur and Kristina’s constituency in Penang.

She said that all of them sealed their votes in front of the pilot, who was gracious enough to take the ballots home with him.

The flight from Houston is supposed to arrive in Malaysia at 1.30pm Wednesday (May 9), cutting it very close to the 5pm deadline given by the Election Commission.

From there, the pilot’s sister will pass her ballot to a runner, who will go to klia2. There, the vote will be passed to someone who is on a 2.30pm flight to Penang.

In Penang, there will be someone waiting at the Bayan Lepas airport to take it to the returning officer.

Kristina acknowledges that it is a long shot as they had a very tight time frame to work with.

“It is a long shot and we all knew it. It was very exciting, just thinking about getting it on Malaysian soil is already an achievement for me,” she said, adding that she has never been prouder to be Malaysian.

“The resolve of Malaysians to make sure their voices are heard has been very inspiring, from the pulang undi campaign to the runners for postal voters,” said Kristina.

"They have stopped at nothing, and I am proud of being part of something so great."