Hassan al-Kontar has been stranded at Kuala Lumpur International Airport 2 (klia2) since March 7. 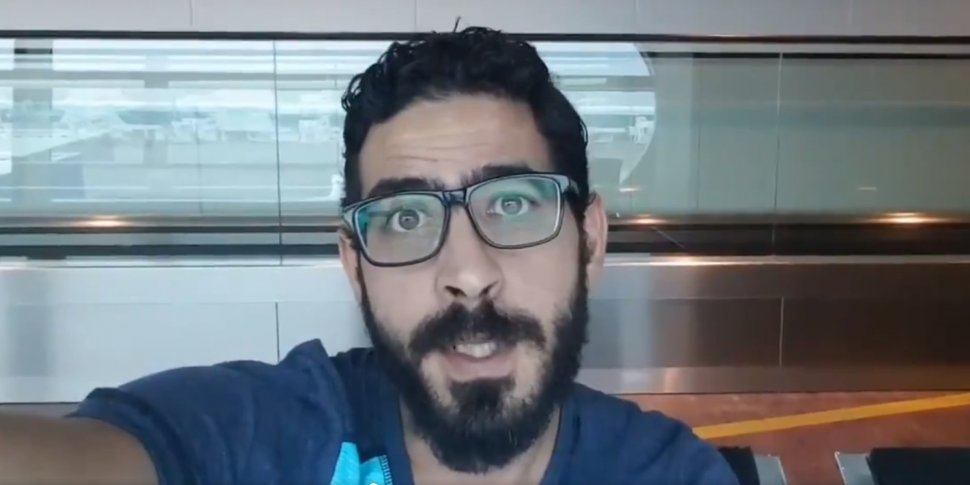 Hassan al-Kontar has been stuck in diplomatic limbo at the Kuala Lumpur airport for nearly two months.

“When you are stuck in the airport you face two kinds of problems in my situation,” al-Kontar told Business Insider. “One problem is creating a daily routine. But the main problem is how to get yourself out.”

Al-Kontar arrived at klia2 after years of struggling to find a better life abroad as a Syrian citizen.

Al-Kontar told Business Insider that he left Syria in 2006 to avoid being drafted into the army and to secure a better future outside his home country’s politically unstable borders.

Things got complicated for the 36-year-old in 2016, after living in the United Arab Emirates for nearly 10 years.

During his time in the UAE, he lived and worked comfortably in the country’s insurance sector but then lost his work visa. He says the Syrian Embassy there refused to renew his passport.

With few other options, Kontar worked illegally for without a valid passport or visa, before UAE authorities sent him to a holding center in Malaysia in January 2017. Malaysia is one of the few countries that offers visas on arrival to Syrian nationals.

Al-Kontar tried to save money and leave Malaysia on two occasions in 2017 – once to Ecuador, another time to Cambodia – but he was rejected each time and sent back to a country he did not choose to live in. He is currently blacklisted by Malaysia for overstaying his visa and is confined to the transit zone of KLIA2.

A life in limbo

Al-Kontar documents his struggles on Twitter to cope with the loneliness of his predicament. He also posts videos of his daily life in hopes of getting the attention of someone who can offer a solution.

He says he has no set schedule, but often begins his day by reaching out to government agencies, volunteers, NGOs and media to get help.

He then sets out for the day, often wandering the terminal or tackling issues that he says he “never thought would ever become a problem but now have become major problems.”

Simple tasks, like figuring out how and when to shower, and how to clean his clothes, have become major obstacles.

“Where will I dry my clothes when there is nowhere to hang them?” he asks. “If I do get a chance to wash my clothes, I wash them quickly and wear them while they are still wet.”

He says he showers quickly, usually after midnight in the accessible facilities to avoid raised eyebrows from travelers.

For food, al-Kontar says he has arranged with generous airport staff to have three prepackaged airline meals a day. He has also become friendly with the cleaning staff, who sometimes buy al-Kontar specialty foods from airport restaurants or coffee shops at discount rates.

Sleep does not come easy for al-Kontar, whose irregular circumstances have made it difficult to rest comfortably.

“I don’t have normal hours to sleep. If I get too tired I will sleep on the chairs in the hall and then wake up for a few hours and then sleep for four or five hours like that on repeat.”

He has created a makeshift bed on the floor underneath a stairwell, away from passengers and blocked off by several safety barriers.

Al-Kontar told Business Insider that government bodies and NGOs have reached out offering temporary solutions, and Malaysia has even offered to vet him for a spot on its Syrian Refugee Program.

While al-Kontar is grateful, he remains committed to finding a long-term solution

Malaysia not a signatory of the 1951 UN Refugee Agreement, which means, al-Kontar says, his refugee and work-rights in the country are not guaranteed.

“They’ve just offered me the chance to stay as long as I need but I cannot work and I can’t have refugee status with a refugee visa, residence visa, or permanent visa.”

Al-Kontar says his future plans include “finding a country that signed the 1951 UN agreement” so he can obtain refugee status and move forward with his life.

“I cannot see the light at the end of the tunnel yet but I am trying to. At this point I have accepted that I will be here for a while.”

Al-Kontar says he cannot return to Syria because of a warrant out for his arrest for dodging the army, nor would he want to, given the current state of affairs.

Al-Kontar last visited his family in Syria in 2008, and still communicates with them on occasion, sparing them the details of his current situation. His father died in 2016, shortly before his transfer to Malaysia, and he was unable to return for the funeral, a move that he says still haunts him to this day.

Fighting back tears, al-Kontar stressed that his story is not just about him, but also provides insight into the plight of millions of Syrians who have fled civil war and are seeking asylum around the world.

“My family is worried about me, of course. But they have their own problems and their own tragedies to deal with in Syria. I feel that I’ve failed them, which is why I am standing up to try and win this fight,” he said.