ECM Libra Financial Group Bhd, which recently ventured into hospitality following the disposal of its investment banking and securities businesses in 2012, has identified three guest accommodation models that will contribute to its growth.

To be placed under the soon-to-be-set-up Ormond Group Sdn Bhd, this wholly-owned unit of ECM Libra will own, operate and/or manage three distinct models that will be the pillars of the hospitality group — Ormond Hotels, Tune Hotels and SubHome. 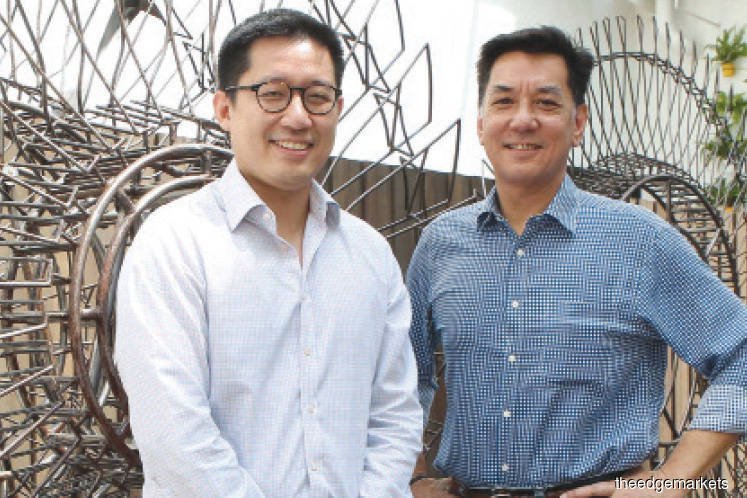 Ormond Group owns four out of 14 Tune-branded hotels in the market. By the end of 2020, this is expected to grow to 15 hotels with 3,000 rooms, representing a significant part of the expected total group portfolio of 22 hotels and 4,000 rooms under the Ormond and Tune Hotels brands.

In a recent interview with The Edge, Ormond Group CEO Gareth Lim and the Head of Ormond Group Development and Partnerships and CEO of Tune Hotels Mark Lankester share details of the planned hotel venture, its expansion and contribution to the listed entity.

“ECM will be a hospitality group going forward that will acquire, develop and operate hotels. It has diversified into hospitality, which adds to the revenue stream of ECM,” says Lim, who also sits on ECM’s board, adding that the asset management business, although it is competitive, is still the company’s core activity. Lim is also the CEO of Plato Capital Ltd. Lim’s father, Lim Kian Onn, is a controlling shareholder of Plato and ECM.

To date, ECM has acquired Tune Hotel 1Borneo, Kota Kinabalu, Tune Hotel George Town in Penang, and the rights to operate and manage Tune Hotel KLIA Aeropolis for an estimated RM30.93 million via cash and share swap. It has also bought into TP Hotel (Flinders) Trust, which owns a two-storey building in Melbourne, Australia, and 50% of Tune Hotel klia2. The other half is owned by Plato.

A significant change that Ormond Group will undertake is the repositioning of Tune Hotels. The Tune Hotels of tomorrow will no longer be the budget, no-frills hotel associated with the brand.

“What you have seen in the past is going to be considerably changed going forward,” Lankester says, adding that the emphasis will be on the overall guest experience. Tune Hotel klia2 is an example of the transformed brand.

Lim says that when Tune Hotels first started, there was a huge market to be tapped and a decision was made to leverage and replicate the AirAsia model in hotels. At one point, the chain had 45 hotels.

“There is only so much you can do to compete on price. It is not sustainable in the long term. We realised we needed to change. We did not have food and beverage. Because we had no F&B, it meant we had no breakfast and no breakfast meant no group and corporate sales,” Lim says, acknowledging that the model no longer works as efficiently as it did previously.

Accordingly, the group divested some of its hotels, including those in the UK, Australia and Indonesia, so the funds raised could be used to rebuild new hotels.

The group will remain cost-conscious but will also spend on design and guest services, incorporating technology for efficiencies to improve the guest experience.

“All Tune Hotels will be refreshed to the klia2 brand standard,” Lim says, adding that the tagline is “Simplicity Perfected”.

As for the enhancement of Tune Hotel klia2, it is paying off. “Effectively, since the renovation, we have seen an uplift of 35% to 40% in rates compared with last year,” Lankester says.

The upgrade of the 452-room hotel was completed earlier this year and it is the group’s best-performing asset in terms of rates and occupancy.

Next year, ECM is introducing a new luxury hotel brand called Ormond Hotels, which is a collection of boutique hotels. The name Ormond comes from a hotel in Dublin, Ireland, of the same name that Plato Capital acquired in 2013. This non-operational hotel first opened in 1889. The group expects the Dublin hotel to commence operations by the end of next year. Kuala Lumpur’s first Ormond is expected to open next year as well.

“Certain properties, such as the one in Kuala Lumpur, will be repositioned as Ormond hotels by July next year. The intention is to completely redo and reopen it as an Ormond,” Lim says of the 273-room property. The refreshed property will also house a Tune Hotel. Post renovation, The Ormond will have 115 rooms while Tune Hotel (new wing) will have 100. The hotel is expected to close its doors in early December to facilitate the makeover. The group has engaged Studio Tack, a New York interior designer to develop the brand.

This will not be the only property that will have dual Ormond and Tune brands. The group is doing the same with its hotel in Melbourne and is mulling a similar move for the asset in Penang.

Emphasis on guest services and value for money

Last month, Tune Plato Ventures Sdn Bhd, a joint venture between Tune Group Sdn Bhd and ECM Libra acquired a 50% stake in SubHome Management Sdn Bhd. SubHome is a hospitality company that manages a portfolio of luxury serviced suites in prominent locations in Kuala Lumpur and Johor Baru. It offers hotel rentals and hotel-like services and solutions to developers with existing or unsold inventory to convert them into revenue generators.

SubHome is growing exponentially and targets to have 3,000 units in Malaysia by end-2018 from 450 units now.

Whether it is Ormond, Tune or SubHome, the three models will emphasise guest services.

“Tune Hotels is no longer a price-led product. We don’t want people to consider Tune Hotels because of RM9 [per night] but consider it because people are saying fantastic things about us. And our prices are going to be value for money,” Lankester says.

“We believe there is demand for this value-for-money type of brand. Value for money can be at various ends of the spectrum,” he says of the Tune and Ormond brands.

“The existing assets ECM has bought will have no significant impact in the near term,” Lim says. “Going forward, we would expect, if we are going to turn this into a proper hospitality group, to see P&L [profit and loss] returns from trading performance, bringing on new partners and management contracts. This is where we would expect to see it.”

Ormond group is also unfazed by the increasing competition on the hotel scene. Lim says that is the very reason it is focusing on providing value and a different guest experience. “We strongly believe there is a market for the Ormond. It is not a cookie-cutter product and it is targeted at delivering a great experience for guests.”

When asked if ECM will eventually purchase the other hotels held by Tune Group, Lim says it would be up to the shareholders. “For various reasons, they have decided to focus their efforts on these [already acquired] assets.”

“It makes a lot of sense to look at transport hubs in Malaysia. We like airport hotels. If the price is right, we would like to go back to the UK. We have had a very good experience there.

“Given that we are in Melbourne, we would like to look at developments in [other cities in] Australia. Hopefully, [we will be able to] work with AirAsia, ideally [in cities] where it flies to,” Lim says. Apart from Melbourne, AirAsia X flies to Sydney, Perth and the Gold Coast.