Low cost-carrier terminal (LCCT) is poised to stimulate air travel demand in the region, following the low-cost carrier’s (LCC) on-going effort to set up LCCT in the region. 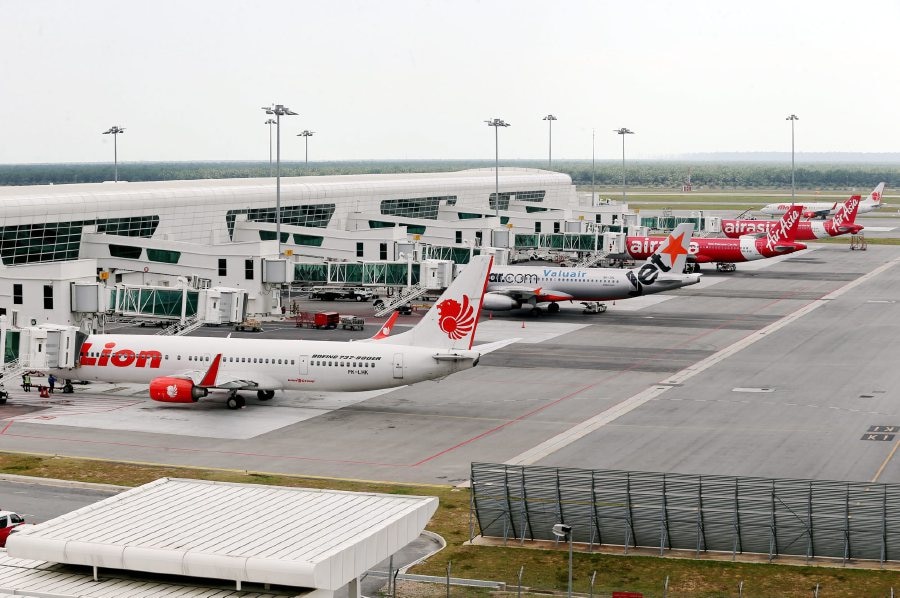 Low-cost carriers operating out of a low-cost carrier terminal will have lower aeronautical charges, whcih then allow them to offer low fares. NST picture by MOHD FADLI HAMZAH.

“However, it depends whether AirAsia can make a strong case for an LCCT. AirAsia will be the leading LCC in the region for many years to come as it has the first mover advantage,” he told NST Business today.

He said the market conditions are fairly equal for all airlines in Malaysia, noting that each airline has to compete against each other.

“LCCT potentially lowers the overall flying cost because it has lower taxes compared to the main terminal,” he said.

Sobie said an airline will also incur cheaper airport-related cost such as landing and parking of their plane, this in turn would lower air fares and encourage rapid growth.

“LCC can’t just raise the fares and expect the company to grow,” he added.

However, he said the main established airport will still be the primary mover.

“LCCTs can potentially reduce a bit of cost and open up the market for more people to fly,” he said.

Mohshin added LCCT’s new cluster of growth will be limited, citing that it only just for people who are more price-conscious.

“But for the Malaysian market – based on AirAsia Bhd group chief executive officer, Tony Fernandes’ demand, LCCT will be cheaper and that was the fundamental request that he made. It needs to have lower airport tax,” he said.

Mohshin said the difference between LCCT and the main terminal is only the charges incur by airlines such as the terminal usage and counter fees as well as airport passenger service tax.

Another aviation analyst said it is highly possible for AirAsia to dominate the Asean market due to its attractive ticket pricing, marketing and promotion.

“I believe it is possible because the domestic routes don’t need to travel in luxury. Everything is about getting fast to the destination.

He added AirAsia wanted to lobby for LCCT, which is dedicated towards passengers who want to have a fast turnaround time and do not require for shopping.

“Although the passenger service charges (PSCs) are the same between KLIA and klia2 – the low-cost terminal has less facility, comfort but it has faster turnaround time,” he said.

Most importantly, he said AirAsia requires bigger airports and LCCTs to accommodate its incoming plane, hence it can help to expand further.

“AirAsia has a lot of plane orders to expand fast. However, if they have more planes but the capacity is constraint because of the airport, it doesn’t mean AirAsia can fly more passengers,” he said.

AirAsia group chief executive officer, Tan Sri Tony Fernandes said it is close to getting more LCCTs, which would provide a huge favour for the airline.

“In Malaysia, it’s very close. I think the acceptance now that low-cost is different from full-services. It has been a big battle for me for 16 years in trying to convince people from different types of airports,” he said recently.

Fernandes said AirAsia is confident of setting up another LCCT not only at KLIA but also LCCT in states like Kuching, Kota Kinabalu, and Penang as well as in other Asean countries.

“I don’t think we are far away. It is just a matter of quick big step. We will get to 500 plane to join. We need airport and also supporters in that way. I believe the governments starting to see our potential,” he said.

Sobie said AirAsia would not want to rely on the existing terminals at most airports as the cost is too high and it is designed for full service carrier (FSC).

“This is part of AirAsia model to reduce the cost and passengers’ fee. At the end of the day, when passengers fly, they look at the total cost including air fares, fees and taxes.

“If AirAsia able to move to a low cost terminal, the passengers will be able to pay less, which in turn to stimulate the demanding growth in the market,” he said.

Sobie said it has been a big challenge for AirAsia, citing that airports in the region are not always open to LCCT idea.

“AirAsia had a lot of challenges and more setbacks than victory previously. But now, it is an opportunity to start having more victories and successfully persuading airlines to establish LCCT.

“AirAsia has grown a lot over the years. The benefit of LCC is now clearer to somebody’s airports and community,” he said.