AirAsia does it again for the 10th time in a row at the 2018 Skytrax World Airline Awards, winning the “World’s Best Low-Cost Airline” award. 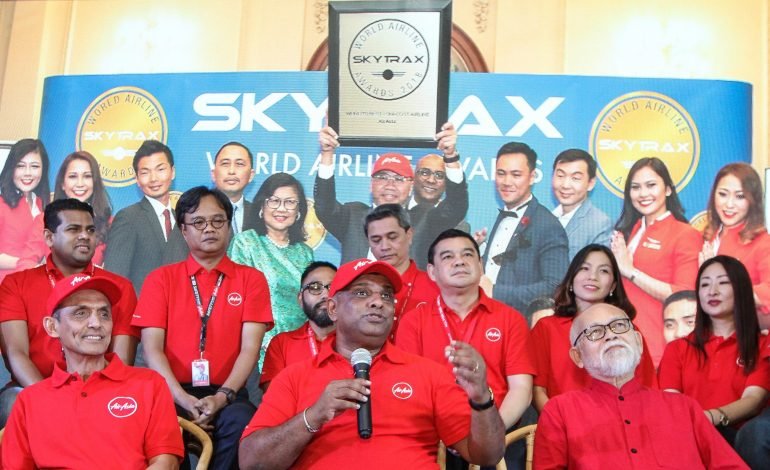 Likened to the “Oscars of the Aviation Industry”, the Skytrax Awards are the global benchmark of airline excellence. Over 20.36 million customers are surveyed worldwide, measuring standards across 49 key performance indicators of an airline’s frontline products and services.

At the ceremony held at The Langham in London, the award was accepted by AirAsia co-founder, AirAsia Group Berhad executive chairman and AirAsia X Group CEO, Datuk Kamarudin Meranun, together with the company’s long-serving “Allstars” staff from across the region.

Kamarudin said: “I remember the ecstatic feeling of being named the world’s best low-cost airline for the very first time 10 years ago, I would have never imagined we would remain the world’s best for a decade.

“Thank you for your tremendous love and support, We will continue to champion low fares and hopefully transform many more lives in the process,” he said.

“Any success and achievement by the AirAsia Group and AirAsia X Group is a direct contribution and value-add of every Allstar staff. It is important that levels of competency, efficiency, and performance be continuously enhanced and upgraded so that the companies will be able to maintain their world-class status in the highly competitive regional and global aviation industry, she said.

AirAsia X was also presented with “Asia’s Best Low-Cost Airline”. The award was received by Deputy Group CEO (Airline Business) Bo Lingam who joined the company in 2001 as a ground operations manager.

“In my 17 years with the company, I’ve witnessed how AirAsia has realised the dreams of more than half a billion people, especially in the ASEAN region. We have connected people and places, created jobs across the region, enabled small businesses to grow, and contributed to tourism in the region. Knowing we have made a difference makes all the battles worth fighting,” he said.

How it all began and where it is today

Meanwhile, back in Malaysia, the win was announced by AirAsia Group Berhad chief executive officer Tan Sri Tony Fernandes at a press conference held at Tune Hotel, klia2, in Sepang.

“When we started this airline 16 years ago with just two airplanes, 200 Allstars staff in Malaysia, and carried 200,000 guests, never in our wildest dreams did we ever imagine it would become the ‘World’s Best Low Cost Airline’. And to be that 10 times in a row is something rather amazing,” he said.

According to Fernandes, in just 16 years, the low cost carrier has flown more than 500 million guests to over 130 destinations, many of which are unique destinations that only AirAsia flies to.

Today, the airline has more than 200 planes, over 20,000 Allstars staff of 50 different nationalities, and half a billion guests, 60% of whom are time flyers, he said.

In true One AirAsia spirit, the win was also celebrated across the group of AirAsia offices in Kuala Lumpur, Bangkok, Jakarta, Manila, Bangalore, and Nagoya, with a special live interactive show broadcasted on the company’s Facebook page.

As part of the victory celebration, the company will also be offering low fares from July 23 to 29 on www.airasia.com and its mobile app. Visitors stand a chance to win one year of free flights by participating in the #WeAreAllChampions social media contest. For more information, visit the airline’s Instagram (instagram.com/airasia) and Facebook (facebook.com/AirAsia).