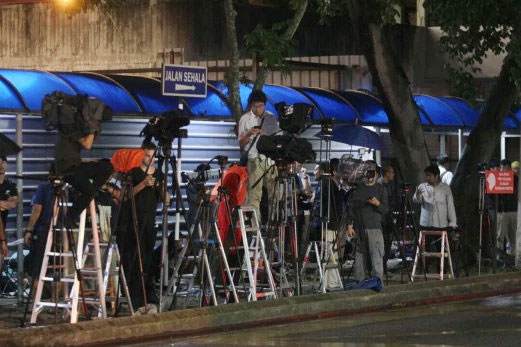 Members of the media waiting to catch a glimpse of Kim Han-sol at Kuala Lumpur Hospital. Pix by YAZIT RAZALI.

Several police vehicles were also seen entering and leaving the premises throughout the night and early morning.

At 4am, about 100 members of the local and foreign press were seen camped outside the building, hoping to catch a glimpse of Han-sol – but, after several false alarms throughout the night and early morning, the younger Kim had yet to emerge.

The North Korean leader Kim Jong-un's nephew, who was expected to arrive at klia2 at 7.50pm yesterday via AirAsia flight AK8321 from Macau, was not seen there either.

He was expected to undergo DNA tests, before making an identification of the body, believed to be of his father.

Health Minister Datuk Seri Dr S. Subramaniam is reported to have said that autopsy results for Jong-nam's body could be released as early as Wednesday.

Deputy Inspector-General of Police Tan Sri Noor Rashid Ibrahim, had on Sunday said that only the deceased's next-of-kin are eligible to step forward to identify and claim the body.

Jong-nam was allegedly murdered at klia2 on Feb 13 by two female suspects, believed to be North Korean operatives.

He was due to board a morning flight to Macau when a woman covered his face with a cloth, believed to be laced with an unidentified toxin.