A high-level North Korean delegation has arrived with three objectives – retrieve the body of Kim Jong-nam, secure the release of a citizen from police custody, and develop friendly relations with Malaysia.

The approach taken by the delegation is a far cry from the harsh stand of North Korean ambassador to Malaysia Kang Chol two weeks ago.

Kang Chol had claimed that the police investigation into the murder of “a North Korean citizen” at klia2 could not be trusted and alleged that Malaysia was colluding with Pyongyang’s enemies. North Korea has refused to acknowledge the identity of the victim.

A spokesman for the delegation, former North Korean ambassador to the United Nations Ri Tong-il, said it was seeking the release of the body from Malaysian authorities.

“We will also be discussing the release of a citizen who was arrested by Malaysian police in connection with the incident. 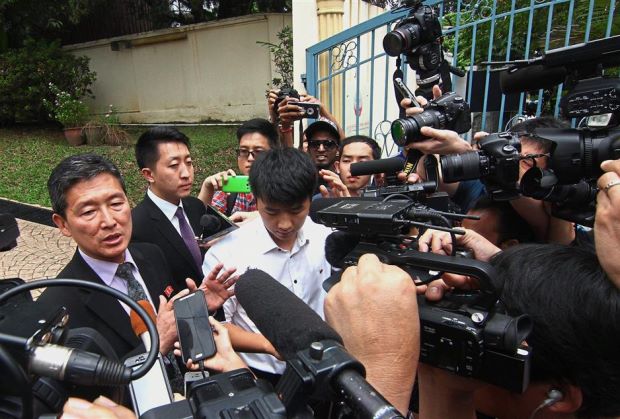 Explaining the situation: Ri (left)addressing the media at the North Korean Embassy in Jalan Batai, Damansara.

“The development of friendly relations between North Korea and the Malaysian Government will also be discussed,” he said, reading out a statement at the North Korean Embassy yesterday.

When asked by the media whether the embassy’s second secretary, Hyon Kwang-song, 44, has been interviewed by police, Ri did not answer and walked away.

Jong-nam, the estranged half-brother of North Korean leader Kim Jong-un, was killed at KLIA2 on Feb 13.

Three others are being sought to assist in the investigation. They are Hyon, Air Koryo employee Kim Uk-il, 37, and Ri Ji-u, 30, who is also known as James.

The women are alleged to have administered the VX nerve agent that killed Jong-nam.

Thi Huong was arrested on Feb 15 as she tried to catch a flight to Vietnam while Siti Aisyah was nabbed the next day. Their remand expires today.