Two women – an Indonesian and a Vietnamese – were charged at the Sepang court today with murdering the estranged half brother of North Korea’s leader in an assassination using a super-toxic nerve agent that killed in minutes.

Siti Aishah, a 25-year-old mother of one from Jakarta, and Doan Thi Huong, 28, from rural northern Vietnam, could be hanged if they are convicted for the killing of Kim Jong Nam at KL International Airport on Feb 13.

Police brought the two women to court handcuffed and wearing bullet-proof vests. Siti Aisyah and Thi Huong were calm as they were brought to the courtroom separately at 10.10am. No plea was recorded after the charges were read out against them.

Aishah and Huong have told diplomats who visited them in custody that they were unwitting pawns in an assassination that US officials and South Korean intelligence have said was organised by North Korean agents.

The next court date will be on April 13, when prosecutors will apply for the accused to be tried jointly. In the meantime, the two women were sent to Kajang Prison. Kim Jong Nam, who had criticised the regime of his family and his half-brother Kim Jong Un, died after the two women allegedly smeared VX nerve agent, a chemical described by the UN as a weapon of mass destruction, across his face.

Authorities have established that the bearer of the passport with the name Kim Chol was actually Kim Jong Nam. North Korea maintains the victim is a North Korean citizen, but has not acknowledged he is the half brother of its leader Kim Jong Un.

The charges against Aishah were read first, followed by those against Huong.

According to the charges the women and four unnamed people, who are still at large, were at the departure hall of the airport, with intention to murder the North Korean citizen.

One North Korean man, identified by police as Ri Jong Chol, is still in police custody and has not been charged yet.

Malaysian police arrested both women in the days after the attack. Security camera footage, which has been broadcast by the media, showed them assaulting Kim Jong Nam at the airport. He died within 20 minutes.

Both women have told diplomats from their countries that they had been paid to take part in what they believed was a prank for a reality television show.

Speaking in Jakarta, Indonesia’s foreign ministry spokesman Armanatha Nasir hoped Aishah would receive a fair trial. “We hope that the principle of a defendant being presumed innocent until proven guilty will be adhered to.

“The lawyer that has been appointed will make the case for Siti and we hope that she gets a fair trial, afforded all her legal rights and not tried by the public.” Gooi Soon Seng of Messrs Gooi and Azura said he was the lead counsel for Siti Aishah and was recently appointed by the Indonesian embassy.

Malaysian police have said the suspects had washed their hands after the assault, and were aware that the liquid smeared on their victim’s face was toxic.

Aishah’s lawyer, Gooi, was granted a gag order to restrain police and potential witnesses from making public statements that may incriminate his client.

Huong, the Vietnamese woman, was detained 48 hours after the murder in the same airport terminal where Kim Jong Nam was killed.

Huong’s lawyer said outside the court his client had told him she was innocent. “She denied. She denied. She said ‘I’m innocent’,” Selvam Shanmugam said. “Of course, she’s definitely distressed because she is facing death penalty,”

She is believed to be the woman wearing a white shirt emblazoned with the acronym “LOL”, whose image was caught on security cameras while waiting for a taxi after the attack.

The Indonesian woman, Aishah, was detained a day later. She reportedly suffered a bout of vomiting while in custody that police have said was a side-effect of exposure to the VX. Indonesian diplomats who visited her subsequently said she was in good health. 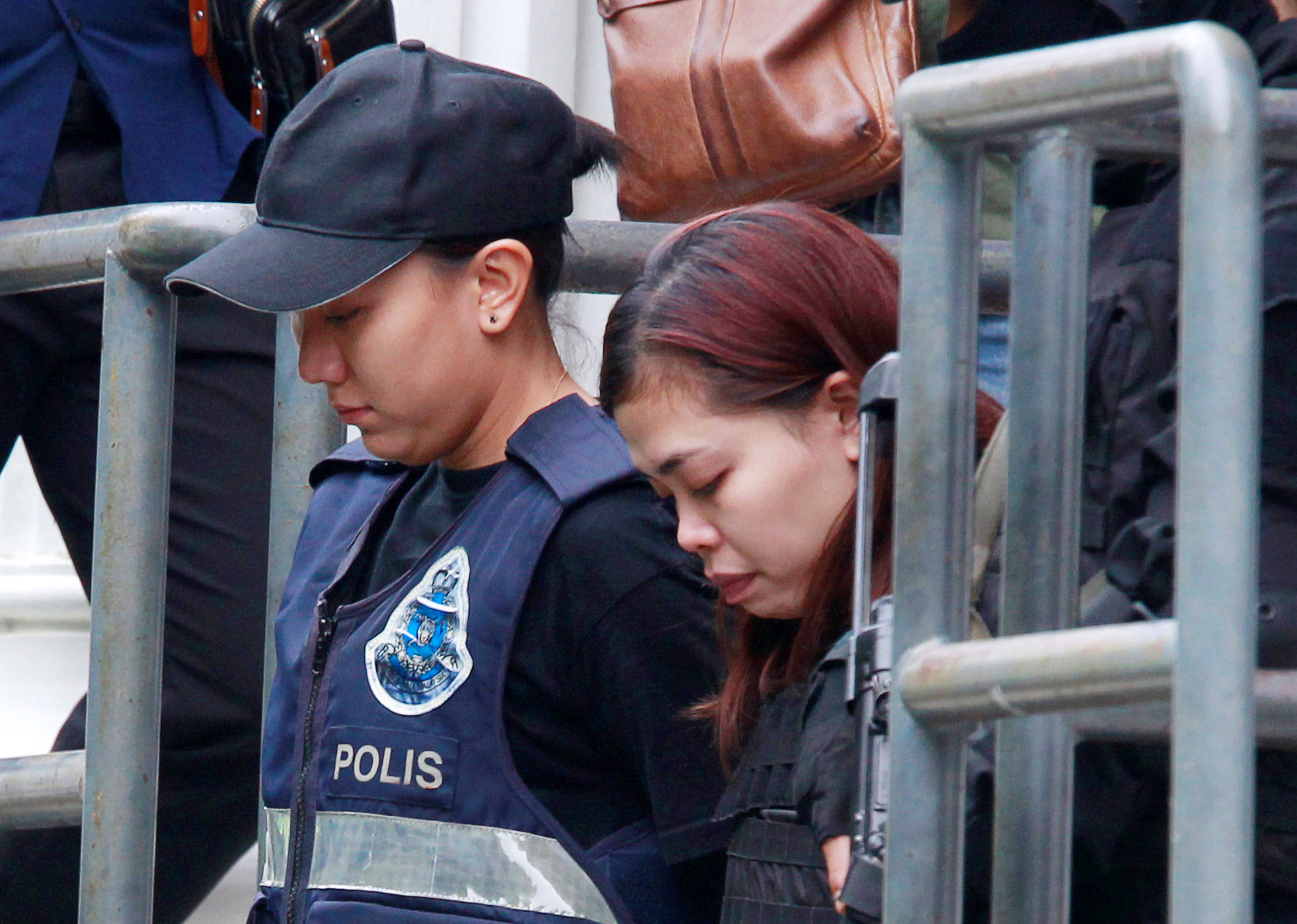 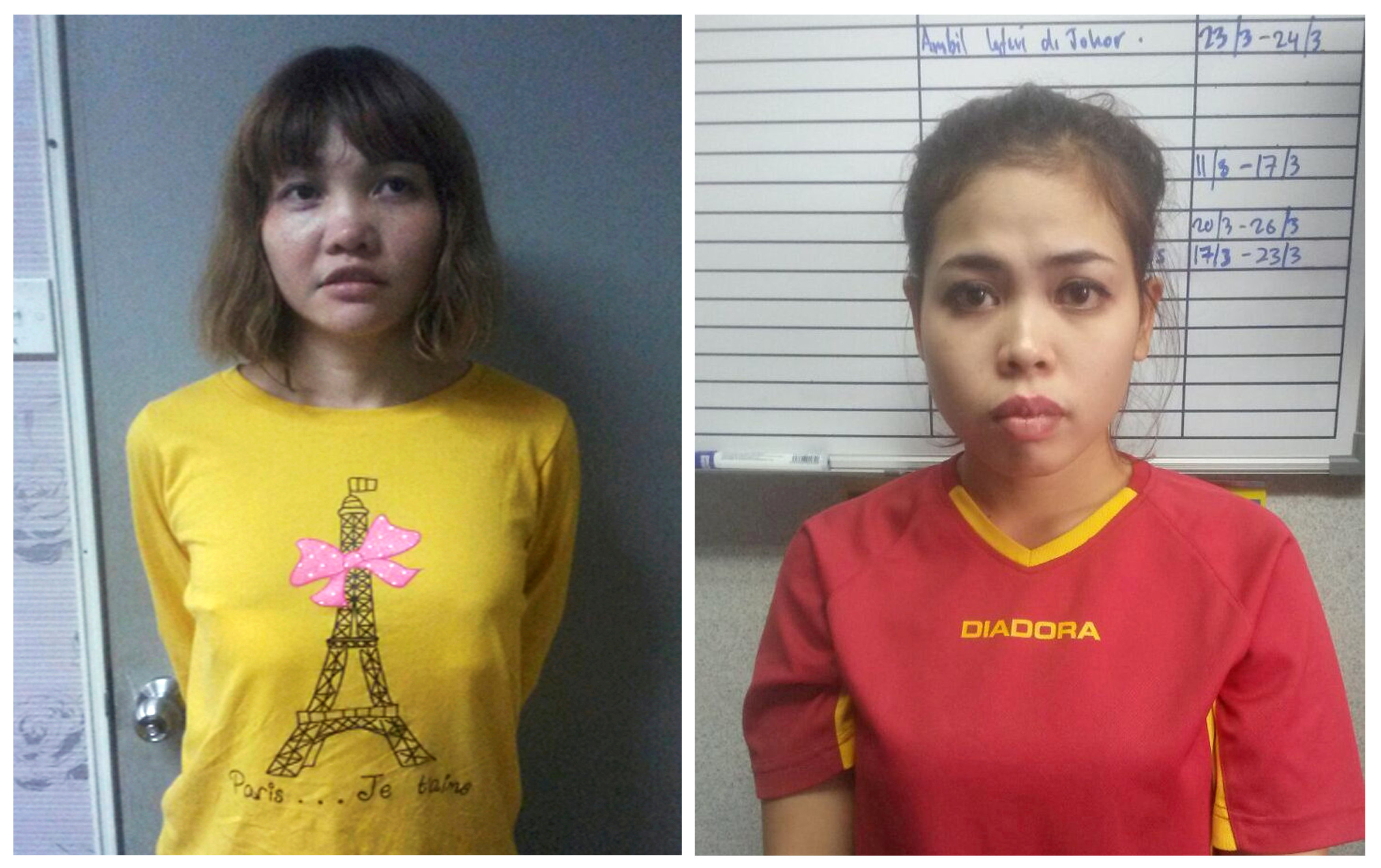