The two women were brought to the Sepang Magistrates' Court amid tight security around the court complex this morning.

The two female suspects who attacked the half-brother of North Korean dictator Kim Jong Un on Feb 13 were today charged in the Sepang Magistrates’ Court with murder.

Indonesian Siti Aisyah and Vietnamese Doan Thi Huong were charged under Section 302 of the Penal Code with the murder of Kim Chol, at the low-cost carrier airport, klia2. Kim Chol is the name given on the passport issued to Kim Jong Nam.

Tests by Malaysia’s chemistry department have shown that the two had allegedly wiped a chemical poison, VX nerve agent, that is categorised by the United Nations as a weapon of mass destruction, on his face.

The murder charge against Siti, 25, and Doan, 28, was read along with Section 34 of the Penal Code.

If found guilty, both face the mandatory death sentence. 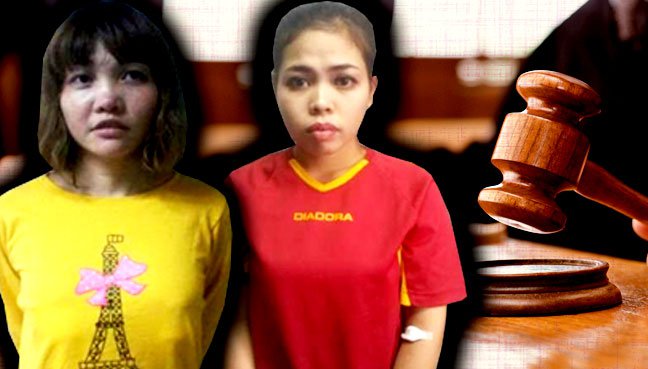 The section states that “when a criminal act is done by several persons, in furtherance of the common intention of all, each of such persons is liable for that act in the same manner as if the act were done by him (or her) alone”.

No plea was recorded after the charges were read to them.

Doan was arrested on Feb 15 as she was attempting to catch a flight back to Vietnam. Siti was detained the next day in a raid at a hotel in Ampang, where she was said to have been holed up following the killing.

Both women were positively identified based on CCTV footage from klia2 on the day of the attack. Police were also reported as saying that they were captured by security videos elsewhere in the Klang Valley “practising” ahead of the attack.

However, Indonesia’s deputy ambassador to Malaysia, Andriano Erwin, said on Saturday that Siti claimed to have been paid RM400 to be part of a TV prank show.Inspector-General of Police Khalid Abu Bakar had reportedly said the women knew what they were doing when they attacked Jong Nam, and were instructed to wash their hands afterwards.

Reports had also quoted Doan’s father hinting that his daughter was set up.

“How could she be brave enough to do it? She’s afraid of frogs and rats, what more to do something like that?” her father had reportedly told news agencies.

Doan’s family who were shocked by the allegations against her, described her as “kind-hearted and gullible”. She was said to have left home to study pharmacy about 10 years ago and they have seldom seen her since.

She last returned to her home town of Nam Dinh for the Lunar New Year celebration in late January.

Siti, on the other hand, had celebrated her birthday with friends the night before the killing, according to a video clip released by China Press.

The vernacular paper posted the video on its YouTube channel on Saturday, and also spoke to a friend of Siti.

The friend, who did not wish to be identified, said a group of Siti’s friends decided to throw her the party on Feb 12 at a popular nightclub in Kuala Lumpur.

Jong Nam, the eldest son of the late North Korean leader Kim Jong Il, arrived in Malaysia on Feb 6, and was at klia2 to catch a 10.30am flight to Macau on Feb 13 when he was attacked by Doan and Siti.

Aside from the two women, police had also nabbed a Malaysian, Muhammad Farid Jallaludin, and North Korean citizen Ri Jong Chul to help in investigations into the murder.

Four other male suspects, all North Korean, fled the country on the same day of the murder. They have been identified as Ri Ji Hyon, Hong Song Hac, O Jong Gil and Ri Jae Nam.

Two other North Korean suspects, Hyon Kwang Song, who is the second secretary with the embassy in Kuala Lumpur, and Air Koryo employee, Kim Uk Il, are also wanted by police to help in the investigations.