When the photo of the bunting with misspelt words in the Christmas greeting went viral on social media, the credibility of MAHB was undermined.

First impressions count! In many everyday situations, it is your writing skill, used in the writing of an application for a job, the answer to an examination question, or a letter of complaint that betrays a lot of information. 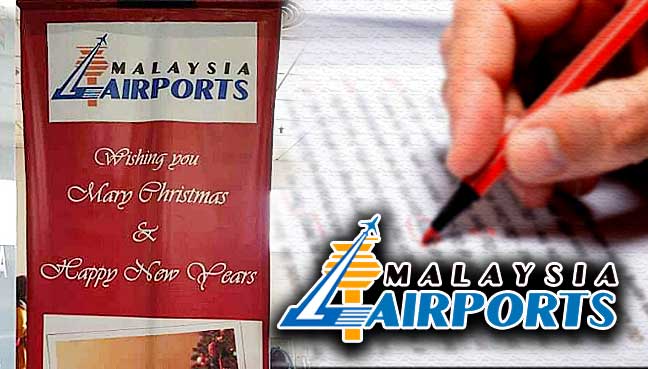 If the administrative offices of the Kelantan branch of Malaysia Airports Holdings Bhd (MAHB) had spent a few minutes proofreading the printer’s work, it would have saved itself a major embarrassment.

The blunder which greeted passengers at the Sultan Ismail Petra airport, in Kota Bharu read “Mary Christmas” and “Happy New Years”. The erroneous Christmas message may have amused us, but when the photo of the bunting went viral on social media, the credibility and authority of MAHB was undermined.

The fiasco at the klia2 airport terminal further dented the reputation of MAHB, which has already been pummelled over the raising of airport fees, the continual flooding of the runway, and the aero-train at Malaysia’s major airport, KLIA, experiencing recurring breakdowns.

Most people place little emphasis on proofreading. In most instances, a written piece tells strangers what you are like as a person. That you care about your work. That you want to create a good impression. That you know what you are talking about, and are an expert in your field, and that you are a person whom the recipient can trust.

Simple errors give the recipient of your written work a completely different picture of yourself. Mistakes can be avoided by a few minutes of proofreading.

Some of you may think that a small error will not make any difference. Are you sure? The tiny error that you consider insignificant, may mean the difference between passing or failing an examination. It could be the deciding factor in an entry to university. If a human resources manager has made a shortlist of two candidates, the person who wrote the letter with a glaring error, is likely to be rejected.

The Kelantan Christmas bunting has also exposed a serious flaw in MAHB’s administration. Did no-one proofread the printer’s final work? Was MAHB, in Kelantan, seriously overworked over the holiday period? Are they short-staffed?

If the printer’s copy was proofread and approved by MAHB, it suggests that the member of staff in charge of the final copy is incompetent. He did not have to read reams of printed material. He only had to check five words. These words are not ones which have complex spelling, like ilk, or long words like ambidextrous; the words are common stock phrases. There should have been no room for error.

Passengers know the cost of spelling one’s name wrongly on an air ticket. Airlines don’t just charge a hefty administrative fee to correct this error, but in most cases, we hear that passengers have to buy new tickets. Being careless is expensive.

Many Malaysians would have tucked into their Christmas lunches by now, and those who are figure conscious would have taken tiny portions of the rich Christmas pudding, because they are aware of the cliché, “A moment on the lips, a lifetime on the hips”. Similarly, MAHB should have realised the consequences of their Christmas bunting blunder. It only takes a few clicks of a photo, and uploading onto social media, for Malaysians to ridicule MAHB, forever.

Mariam Mokhtar is an FMT columnist.