Between March, when the PTPTN (National Higher Education Fund Corporation) set up a counter at klia2, and Dec 1, a total of 5,674 loan defaulters who were on the immigration blacklist approached the counter to negotiate repayment of their loans, which totalled RM21.2 million. 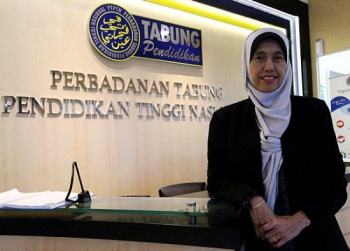 This worked out to almost 20 PTPTN loan defaulters a day opting to pay back their loans on being told by immigration officers that they were barred from leaving the country, Oriental Daily Newsreported on Monday.

PTPTN deputy chief executive Mastura Mohd Khalid (pix) told the daily that currently some 453,000 PTPTN borrowers who are on the immigration department's blacklist, have yet to approach the corporation to negotiate the settlement of their loans.

However, she stressed that those who are on the immigration blacklist need not worry that they might have to settle their loan in full before the ban on leaving the country is lifted.

Loan defaulters can approach any PTPTN counters to ask for a rescheduling or restructuring of repayment, she said, adding that they would be allowed to exit the country once they have settled part of their loans.

She said borrowers will be asked to apply for loan repayment via monthly deduction from their salary to ensure they would not default on their loan again after the trip.