North Korea today rejected here allegations by South Korea that it was connected with “the events in Malaysia,” China’s Xinhua news agency reported.

During the High Level Segment of the Disarmament Conference in Geneva, a North Korean representative said North Korea totally rejected the remarks of Seoul’s foreign minister Yun Byung-Se – which suggested that Pyongyang used chemical weapons to assassinate in Malaysia the half-brother of its top leader, Xinhua reported.

The North Korean diplomat denounced the remarks as “part of a sinister defamation campaign,” Xinhua said.

“We categorically reject the assumptions and speculations on the incident in Malaysia.”

Yun said earlier during the meeting that the assassination of “the brother” of the current North Korean leader in Malaysia with the internationally banned VX nerve agent was a major cause of concern. 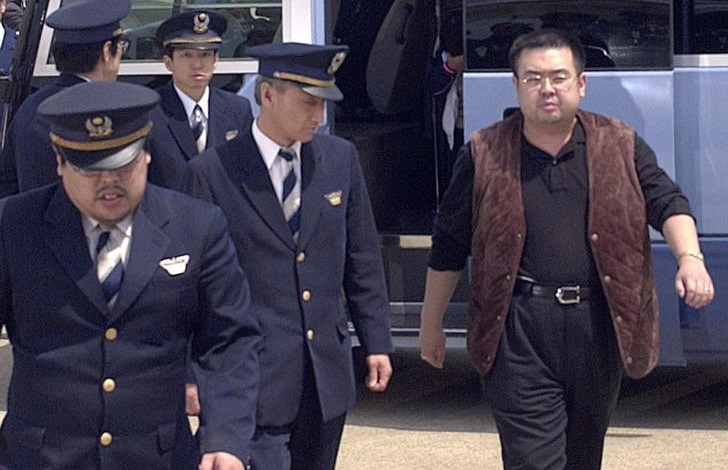 A man (R) believed to be North Korean heir-apparent Kim Jong Nam, is escorted by police as he boards a plane upon his deportation from Japan at Tokyo’s Narita international airport in Narita, Japan, in this photo taken by Kyodo May 4, 2001.

“VX is a chemical weapon classified as a weapon of mass destruction by the United Nations and strictly banned by international norms and resolutions.”

The South Korean top diplomat said the “recent assassination” showed that its northern neighbour was ready and willing to strike anyone, anytime and anywhere.

Once the Malaysian government releases its final investigation results, the case should be taken up as a high priority by the UN Security Council and the Chemical Weapons Convention and the country’s membership at the UN could be suspended, Yun said.

In response, the North Korean representative said the South Korean minister ought to be careful about when and where to raise the issue of membership of countries in various UN bodies.

“They should bear in mind that their ridiculous efforts of blaming other member states would end up in failure,” the North Korean PRK diplomat added.

Malaysian police said the chemical weapon substance had been identified on the body of a North Korean man who died on his way from a Malaysian airport to hospital on Feb 13.

In PUTRAJAYA, the Health Ministry will decide on the next course of action if the next-of-kin of murdered Jong-nam don’t claim the body after “a certain period of time”, said Minister Datuk Seri Dr S. Subramaniam.

Although there was no deadline to claim the body, the government hoped Jong-nam’s relatives would come forward and provide DNA samples to conclude the forensic procedure, he said.

“So far, no family member has come forward to identify or claim the body. We need a DNA sample of a family member to match the profile of the dead person.

“Malaysian law says the body can only be claimed after the DNA process since the North Korean has two names – Kim Chol and Kim Jong-nam. We want to draw a conclusion, and that’s why we need DNA samples to confirm his identity.”

Asked how long Jong-nam’s body would be kept, Dr Subramaniam said the high-profile case had many implications and the ministry would find the right decision in compliance with the country’s laws.

He said unclaimed bodies of Malaysians could be kept for up to three to four months and would be handed over to volunteer bodies for the final rites – with police permission, after placing an advertisement in the local papers.

“However, this (Jong-nam) case involves a foreign national and it needs the views of the parties concerned.

“In this very unusual case, the government will make a decision after the body is not claimed for a long period, taking into consideration the international system and bilateral ties between the governments.”

Asked if he had met with a high-level North Korean official, who had come to Malaysia, he said he did not meet the official.

“Whatever their request, our answer remains the same and we will not accede. Malaysia will follow our protocol and we have established the cause of death, and will not change it for any reason.

“We are firm on the decision that we will not release the body until we have identified it and will only hand it over to the rightful relatives of the deceased.”

Asked if the Health Ministry would contact the next-of-kin or relatives, he said it should be done by the police and Foreign Ministry.

To a question, Dr Subramaniam said there was no sign of the VX nerve agent poisoning on the two women suspects caught after the murder.

“I also instructed 13 medical personnel – those who came in contact with Jong-nam at klia2 (KL International Airport 2), ambulance and Hospital Putrajaya staff – to be monitored for symptoms and to determine whether any of them had suffered contamination.”

Jong-nam was at klia2 at 8am on Feb 13 to board a flight to Macau an hour later when two women suddenly appeared before him and allegedly wiped his face with the palms of their hands which contained what was later identified as the VX nerve agent.

Jong-nam reportedly sought help at a customer service counter at the airport and was rushed to the Putrajaya Hospital but died on the way. He had come to Malaysia on Feb 6.

Separately, the police have yet to receive any information from North Korea or its embassy here on the seven people sought over the murder of Jong-nam, Inspector-General of Police Tan Sri Khalid Abu Bakar said today.

He said the North Korean embassy had not extended the cooperation requested by the police to facilitate investigation into the killing of Jong-nam. “They have not extended any form of cooperation. We will let you know the next course of police action if they still do not want to cooperate.”

Asked about the arrival of a North Korean senior official to discuss matters related to the murder, Khalid said there was no necessity for the official to meet the police but perhaps with Wisma Putra.

North Korea’s former ambassador to the UN, Ri Tong Il, arrived at the embassy and declared that he would be the official spokesperson in matters related to the murder.