The two suspects held in the probe into the killing of Kim Jong-nam were not affected by the VX nerve agent used in the commission of his murder.

Health Minister Datuk Seri S. Subramaniam yesterday said they did not show any signs of illness arising from exposure to the deadly toxic substance.

“A medical check has been conducted and the suspects are free from the (effects of the) nerve agent and there is no sign of illness among the suspects.”

It was reported that Jong-nam, the half brother of North Korean leader Kim Jong-un, was waiting for his flight to Macau at the KL International Airport 2 (klia2) on Feb 13 when two women suddenly wiped his face with their hands laced with suspected poison – which was later confirmed to be VX nerve agent.

He died on the way to hospital. The Indonesian and Vietnamese female suspects are expected to be charged today in connection with the killing. 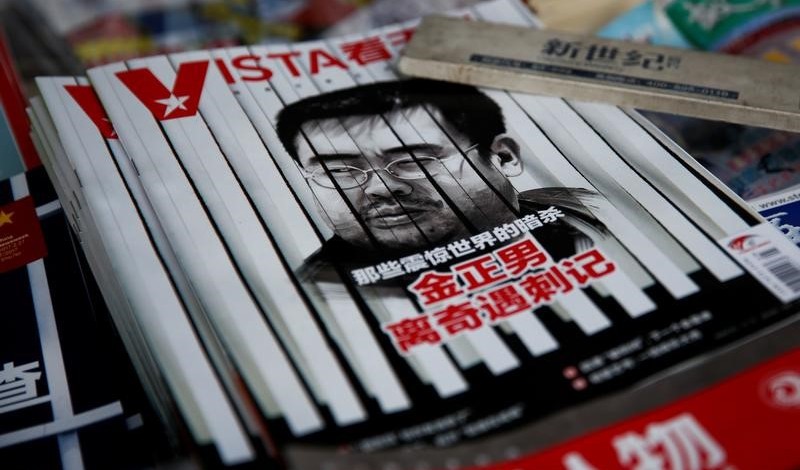 The cover of a Chinese magazine features a portrait of Kim Jong Nam, the late half-brother of North Korean leader Kim Jong Un, at a news agent in Beijing, China February 27, 2017. The headline reads: "Stranger than fiction assassination diary."

Meanwhile, Malaysia said it will not share with international bodies information on the investigation into Jong-nam’s murder until the entire legal process has been completed.

Deputy Prime Minister and Home Minister Datuk Seri Dr Ahmad Zahid Hamidi said the sharing of information via mutual legal assistance – encompassing the four aspects of DNA, forensics, chemistry report and CCTV recording – would only be feasible if there was a request and the entire legal process had been completed.

He said Malaysia could share information with international intelligence agencies and the information could be used by the UN after the Malaysian police and the judiciary had finalised the legal processes respectively.

“Malaysia is open to sharing (information) with them but they have to respect the country’s legal and judicial systems.”

Ahmad Zahid was asked to comment on the reported suggestion by Britain for Malaysia to share with the UN information on the lethal VX nerve agent used to kill Jong-nam for the world body to take action against North Korea.

British Ambassador to the UN Matthew Rycroft told journalists at the UN information on the Feb 13 attack at klia2 that killed Jong-nam should be sent to the Hague-based Organisation for the Prohibition of Chemical Weapons.

Ahmad Zahid said the investigation must be conclusive, not involving just the police but also the Health Ministry, Malaysia Airports Holdings Bhd and the operator of the CCTV cameras which recorded the incident.

He also said a preliminary investigation by the police found the suspects in the murder case had begun their operation two months before the killing.

The police acted in accordance with the standard operating procedure and the investigation was found to be justified when the incident took place and was recorded by the CCTV cameras, resulting in two suspects being arrested within 48 hours after the murder, he said.

Asked whether the case had tarnished Malaysia’s image, Ahmad Zahid said he was not worried about that because Malaysia neither had any hidden agenda nor had colluded with any other country or sheltered criminals.

He confirmed the DNA report had been completed but, based on the country’s laws, it had to be matched with the DNA of the victim’s next-of-kin. “We have taken several measures to contact the next-of-kin (of Jong-nam).”

Inspector-General of Police Tan Sri Khalid Abu Bakar reiterated only the next-of-kin of murdered Jong-nam can claim his body now kept at the Kuala Lumpur Hospital.

The next-of-kin would have to subject themselves to a DNA test and confirmation prior to collecting the body at the National Institute of Forensic Medicine at the hospital, he said.

He said the police would not accept requests to claim the body from anyone else, including the North Korean embassy or delegation, because of the standard operating procedure in the country on the claiming of bodies.

“The police have to match the DNA and confirm it. Only then can we hand over the body to the next-of-kin.”

Khalid was asked to comment on an international media report that North Korea had sent a delegation to Malaysia to claim the body of Jong-nam.

Asked about developments in the hunt for seven suspects in the case, Khalid said the police were on their trails.

“Although two women suspects – a Vietnamese and an Indonesian – are to be charged in the Sepang Magistrate’s Court, the police will continue their hunt for the others to help in the investigation.

“We will use all avenues available, including seeking the cooperation of Interpol.”