Foreign affairs minister says there is no need at present for any third party to assist in discussions to break diplomatic deadlock between both countries.

Malaysia is preparing for an official meeting with Pyongyang within the next few days to secure the safe return of nine of its citizens currently stranded in North Korea.

Foreign Affairs Minister Anifah Aman said today numerous unofficial discussions had been conducted up till now with the North Koreans through their embassy in Kuala Lumpur.

“They want to start (formal) talks. But before we start talking we have to discuss a lot of matters (internally) first,” he told a press conference here today.

He added that the ministry was in the midst of collecting input from the various agencies including the police and the health ministry.

The venue for the meeting has not been set yet, he said. It is understood that the Foreign Ministry’s Secretary General Ramlan Ibrahim will head the delegation. 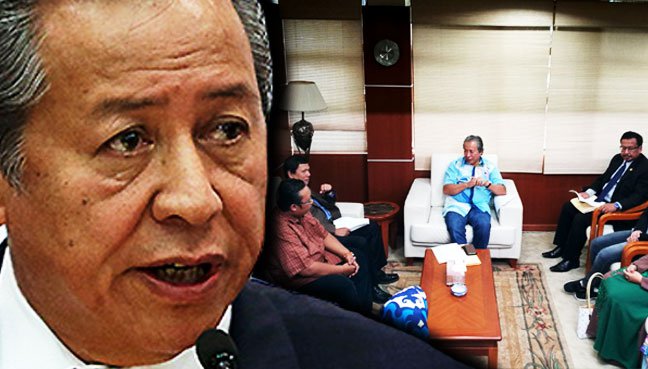 For now the priority is to bring the Malaysians in North Korea home as soon as possible, though no fixed timeline has been set, he stressed.

Nine Malaysians have been stranded in Pyongyang for several days now after North Korea barred all Malaysians there from leaving the country in the wake of a diplomatic row over the assassination of Kim Jong Nam in the Kuala Lumpur International Airport 2 (klia2) on Feb 13.

There were initially 11 Malaysians – nine embassy staff and their families and two United Nations World Food Programme aid workers – in North Korea but the two aid workers have since been allowed to leave. It was reported earlier today that they had arrived safely in Beijing.

Anifah also said Malaysia had received numerous offers from various countries willing to play a third-party role in the on-going row but so far there was no need for this.

“Discussions are being done directly with the North Korean embassy. So far there is no need for a third party. Hopefully we won’t need one,” he said.

He said other embassies in Pyongyang had offered to provide Malaysian embassy staff with any supplies they may need.

Earlier, Anifah met with family members of the stranded Malaysians to reassure them about the safety of their loved ones. He also informed the families that they could contact the ministry’s operations room – which is open 24 hours a day – should they need any information.

“Earlier today I spoke to Azrin (embassy counsellor Mohd Nor Azrin Md Zain). He told me there was nothing unusual there and that they (the Malaysians) were free to move around.”

He added that North Korea had also given its assurance that the Malaysians were safe.

Regarding the release of the body of Jong Nam, the half-brother of North Korean dictator Kim Jong Un, Anifah said more discussions were required before a decision could be reached.

He also said that if the Malaysians stranded overseas were allowed to return, Malaysia would continue to retain its diplomatic ties with North Korea.

Tensions between the two countries reached a peak earlier this week when North Korea barred Malaysians there from leaving, and Malaysia reciprocated with a similar directive on North Koreans here.

Both countries have also expelled each other’s ambassadors, declaring them persona non grata.

This came after the death of Jong Nam who was attacked by two female assailants at the low-cost carrier terminal klia2 in Sepang.

North Korea has protested against the murder investigations on Jong Nam’s murder, and denied it was planned by Pyongyang.

Malaysian authorities meanwhile have charged two women, a Vietnamese and an Indonesian, with the murder.

Police have also identified eight North Korean nationals for questioning, one of whom has since been deported.