Several embassy staff members, including counsellor Kim Yu-song, were seen leaving and entering the compound while continuing to ignore the media, which has been staking the building since the assassination of Jong-nam on Feb 13 at klia2.

A large bouquet of yellow sunflowers and roses placed under the embassy mailbox on Friday by NGO Solidariti Anak Muda Malaysia (Samm), calling for the safe return of Malaysians in North Korea, remained untouched. 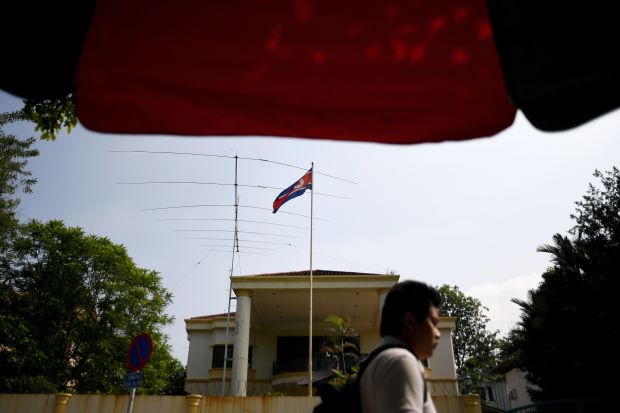 Caught by the charm of the vibrant flowers in front of an otherwise nondescript building, several tourists were seen posing for photos in front of the embassy.

Other than some laundry hung out to dry on its right-wing verandah, there is little trace of habitation within the embassy walls.

Policemen continue to be stationed outside the building.

Authorities believe that Hyong Kwang-song, the 44-year-old second secretary at the North Korean embassy, and Kim Uk-il, 37, an Air Koryo staff member, who are suspects in the murder investigation, are still in the country.

A warrant of arrest was issued for Uk-il last week and a letter requesting Hyong’s cooperation was sent through Wisma Putra and delivered to the embassy.

Jong-nam was killed at the klia2 departure hall, with what Malaysian police said was the banned VX nerve agent.

Four other North Korean suspects, believed to have been the masterminds behind the murder, have left the country.