The Kuala Lumpur International Airport (KLIA) and klia2 have become the first airports in Southeast Asia to have a permanent helpdesk to assist Chinese tourists. 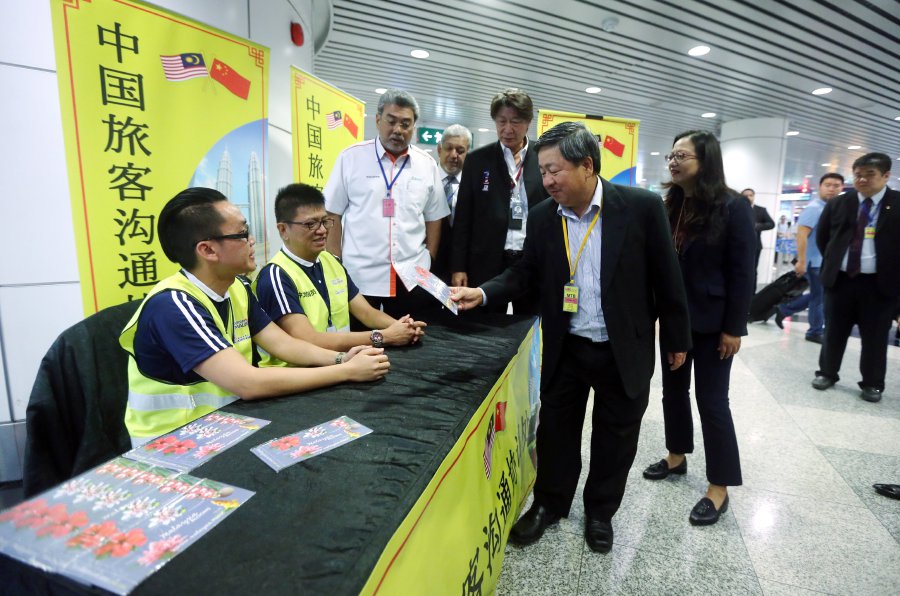 Kuala Lumpur International Airport (KLIA) and klia2 have become the first airports in Southeast Asia to have a permanent helpdesk to assist Chinese tourists. (Pix by MOHD FADLI HAMZAH)

Dubbed as the Chinese Travellers Affairs Helpdesk, Embassy of China deputy chief of Consular Office Wu Shenghao said Malaysia was the first in the region to have such a permanent facility.

"Previously Thailand has provided a helpdesk for Chinese visitors at its airport, but it is only temporary," he told reporters at the launch of the KLIA helpdesk by Tourism Malaysia chairman Datuk Dr Siew Ka Wei.

Siew said the helpdesk set up near the Immigration counter at the arrival halls of KLIA and klia2 would assist the entry of Chinese tourists by providing Mandarin language support at the two busiest airports in Malaysia.

"Initially, the helpdesk will operate daily beginning Sept 1, from 7pm to midnight when most flights from China arrive.

"In October, the hours will be extended from 5pm to 1am to accomodate a higher number of tourists," he said.

He said the number of tourists from China was one of the biggest in the world with recent forecast that there would be 200 million people from China travelling abroad by 2020.

A total of 2.1 million tourists from China to Malaysia was recorded in 2016 and for the first quarter of this year, there were 551,378 arrivals Malaysia.

Tourist arrivals from China to Malaysia has grown by four per cent in 2015 and 26.7 per cent last year, attributed to the ease of travel formalities for Chinese tourists as well as improved connectivity.

There are currently 470 flights per week between China and Malaysia.

Siew said plans were underway for stage 2 to expand the helpdesk convenience to other airports in Malaysia with the consideration to provide similar assistance to other nationalities with communication issues and lack of English fluency.

Malaysia Airports Holdings Bhd managing director Datuk Badlisham Ghazali said the airport authorities would look at how technology could be used to address language issues so that foreign visitors could enjoy seamless processes when they arrived in or departed from Malaysia.

For now, he said, the helpdesk at the two airports would be manned by volunteers who had undergone tight security screening as they would be at sensitive areas in the airports.

"The common issues faced by the visitors from China are matters related to visas and their unfamiliarity with the signs in the airport."