IGP says the two can help police in investigations into Kim Jong Nam's death at klia2.

Police have yet to ascertain a claim that two suspects wanted in the investigation into the apparent assassination of Kim Jong Nam are “hiding” at the North Korean Embassy here.

“We are not sure if they are hiding at the embassy or not… we are looking for them to help in the investigations. Hopefully, they will come forward,” Inspector-General of Police Khalid Abu Bakar told Bernama when contacted.

Foreign media reported that the suspects identified as Hyon Kwang-song, 44, and Kim Uk-il, 37, were thought to be “hiding” inside the embassy. 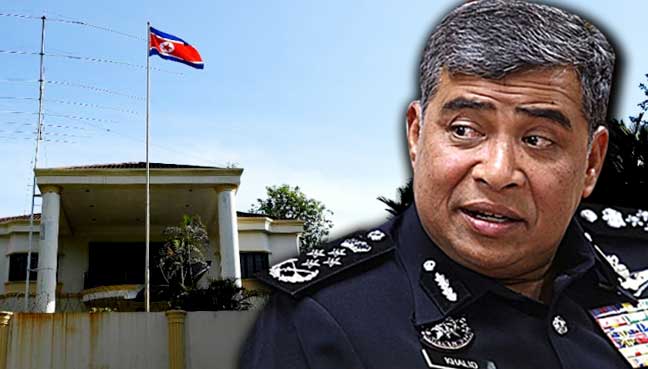 The duo, along with a third suspect identified as Ri Ji U, 30, also known as James, are still believed to be in the country. The whereabouts of Ji U is also unknown.

Jong Nam, the estranged half-brother of North Korean leader Kim Jong Un, died after being attacked on Feb 13 by two women who reportedly swiped his face with what is believed to be poison.Kwang-song is Second Secretary at the mission and Uk Il is an employee of North Korean airline Koryo Air, Khalid said at an earlier press conference.

After the attack, Malaysian police detained four suspects — a woman bearing a Vietnamese passport, an Indonesian woman, a Malaysian man and a North Korean man. The Malaysian was released on police bail.

It was previously reported that police were tracking down seven North Korean suspects – four of whom were said to have fled Malaysia on the day Jong Nam was attacked while waiting for his flight to Macau at the KL International Airport 2 (klia2).

Jong Nam had come to Malaysia on Feb 6 and carried a passport bearing the name of Kim Chol.

More than 50 members of the press gathered in front of the embassy this afternoon to get comments from mission officials following Khalid’s press conference and rumours that two suspects were hiding at the premises.