Retail sales at Malaysian airports have surged over the first five months of the year, with cosmetics and perfume, in particular, flying off shelves. 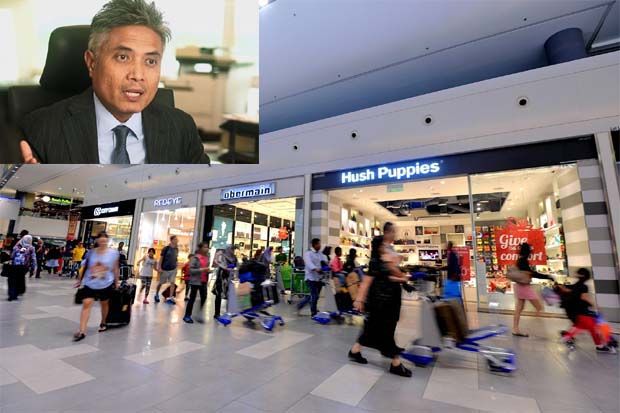 Malaysia Airports senior general manager of commercial services, Mohammad Nazli Abdul Aziz (inset pic) told StarBiz that the division was revising its sales forecast for the year to 5% from 3.5% previously."

Malaysia Airports Holdings Bhd says its sales per passenger has risen by 9% during this period from RM33.96 last year, for Kuala Lumpur International Airport (KLIA) and klia2 alone.

Its senior general manager of commercial services, Mohammad Nazli Abdul Aziz (pic) told StarBiz that the division was revising its sales forecast for the year to 5% from 3.5% previously.

“Based on last year’s performance we had a conservative forecast for this year, but after witnessing a surge in sales during the first quarter, we are revising our forecast upwards,” he said.

He noted that 30% of duty free sales at the airports came from Chinese passengers during the first quarter of 2017.

Tourist arrivals from China to Malaysia totalled 2.1 million last year and is expected to hit three million this year.

Traditionally, he said, the bulk of passengers contributing to airport retail sales were Malaysians, but of late, there had been a rapid rise in purchases from Chinese passengers, who are big buyers of cosmetics and perfume.

He attributed the increase in Chinese passengers to tourism promotions by the government.

Another factor, he said, is China’s ban on its tour groups from visiting South Korea, leading to more passengers deciding to head to Malaysia instead.

“We are benefiting from this at the moment, and we are forecasting further passenger growth based on actual bookings that have already been made,” he said.

In terms of retail categories, the top sellers between 2015 and 2016 were perfume and cosmetics, tobacco, fashion and liquor at KLIA.

As for klia2, passengers spent on perfume and cosmetics, chocolates, tobacco, fashion and liquor.

“Perfume and cosmetics were the top categories, with sales surging due to interest from Chinese passengers,” he said.

He added that the Kota Kinabalu International Aiport also saw a 60% jump in sales, with many Chinese passengers choosing to enter Malaysia via this airport.

Apart from passengers from China, he said there was an emerging trend of passengers from India and well as from Vietnam, who were also big spenders in the retail segment.

In 2016, Malaysian airports operated by MAHB recorded a total of RM2.1bil in retail sales.

This, Mohammad Nazli said, was despite stagnant passenger growth at klia2 last year.

He noted that the spending per passenger was slightly lower at klia2, due to factors including purchasing power.

Many passengers at klia2, he said, were “value travellers” who would look for the best deals and may opt to buy items at their country of destination instead.

“If you look at the spending pattern at klia2, overseas passengers tend to spend more, but it is mostly on food and beverages instead of cosmetics or fashion,” he said.

MAHB’s retail segment received contributions from its unit Eraman Malaysia and parking fees, among others, while its commercial division gains from retail outlet rentals.

Its retailers are required to pay either a fixed rent or an amount based on its turnover, whichever is higher.

Mohammad Nazli said the payments based on turnover has been increasing since last year, due to the group’s various marketing strategies.

Its most recent was the “KUL Dad” campaign to celebrate Father’s Day, part of MAHB’s 25th anniversary celebrations this year.

The joint effort with luxury automobile Lamborghini saw 11 Lamborghini owners “adopt” two children each from Pusat Jagaan Baitus Sakinah Wal Mahabbah in Sepang for a half-day adventure including a short-distance ride in a Lamborghini and a shopping spree at KLIA, sponsored by MAHB.

The campaign, which runs until July 15, is also a partnership with 37 and 25 retail stores in KLIA and klia2, respectively, which are offering special discounts and promotional deals on gift ideas for fathers.

Moving forward, Mohammad Nazli noted that the growth in aviation over the next five years will be focused in the South-East Asian region.

“This is the epicenter of growth and the global industry acknowledges this. The most important thing is for us to be effective in terms of ensuring that the number of passengers entering our airports, reflects in our retail sales,” he said.

So how can MAHB capitalise on this? First, he said, there must be enough dwell time – which is the industry term for the amount of time available to spend shopping and dining before a flight departs.

“If you have anything more than 75 minutes, you are likely to spend.

“From 75 minutes onwards, every minute translates into extra retail revenue,” he said.

In order to achieve this, he said, airports can encourage passengers to arrive and check in early, and must make it worth the passenger’s time.

“The airport experience must be worth it. We have to develop this environment,” he said. However, he noted that there were challenges.

“For one, KLIA is catered for 25 million passengers. We are close to full capacity and need to expand,” he said.

Traditionally, he said, airports have played a passive role in boosting retail sales, but the trend was changing.

One of the initiatives by MAHB is a mobile app that will offer personalised and real-time information to its passengers.

While version 1.0 has already been launched, Mohammad Nazli said there are big improvements coming over the next two years.

“Even before stepping into the airport, you can book your parking spot, be warned about traffic jams and even how long it will take you to get to your departure gate.

“We will soon introduce e-commerce, allowing passengers to buy their duty free items on the app, and collect them at the airport later,” he said.

He said the group was in the midst of data collection and once the data was linked to the app, they would be able to offer personalised services for each passenger, along with the benefits of a loyalty programme.