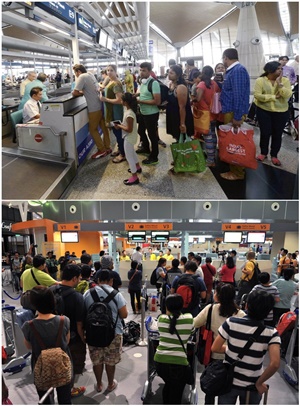 Passengers checking in at KLIA (top) and klia2

Removing the differential in passenger service charges at KLIA and klia2 will go a long way in reducing the cost of air travel, the International Air Travel Association (IATA), said.

"There is no justification for the difference since the facilities and services at the two terminals are comparable," said Vinoop Goel, Regional Director, Airport, Passenger, Cargo and Security, Asia Pacific, IATA.

As such, IATA has maintained its stand in urging the government to remove the differential in the passenger service charge at KLIA and klia2.

Charges for international passengers at KLIA are at RM33 (US$8.25) more per person than they are at klia2.

He was responding to new Malaysia Airlines Bhd (MAS) Chief Executive Officer Peter Bellew's call for charges to be the same at KLIA and klia2 as the current charges were totally anti-competitive.

"We have written to both the Ministry of Transport and the Malaysia Aviation Commission (MAVCOM) to urge the government to remove the differential in the passenger service charge at KLIA and klia2," Goel told Bernama today.

IATA is the Geneva-based trade association for the world's airlines with 265 members which comprise 83 per cent of total air traffic.

In a study, IATA said policies on fees and charges should facilitate the growth of the industry.

Also, aviation was expected to support one million Malaysian jobs and US$26 billion in economic activity by 2035, double that of today, according to the study.

Aviation Consultant and Founder of Malaysian-based Endau Analytics Shukor Yusof said its up to the authorities to decide but the RM33 difference will mean fewer travellers flying out of KLIA.

He said it was justified for MAS to make a request for uniform charges.

Goel said that removing the differential was also aligned with International Civil Aviation Organization (ICAO) principles, which state there should be no discrimination if airlines are accessing the same level of facilities and services.

"As a member of the ICAO Council, it is important that Malaysia upholds this principle," he said.

ICAO, based in Montreal, is a United Nations specialised agency and the global forum of states for international civil aviation.

Goel, however, said that there were instances where charges were justified for the low cost terminal to have a different PSC from the main terminals.

Narita and Kansai are examples, whereby in these cases, the low cost terminals have substantially lower levels of service and facilities, while being more difficult to access than the other terminals.

Ultimately, he said that the priority of the government should be to lower the cost of air travel.

IATA, which commissioned the study, said job creation and gross domestic product growth were by no means guaranteed if the necessary infrastructure was not available, and if the policies, including fees and charges, do not facilitate the growth of the industry.