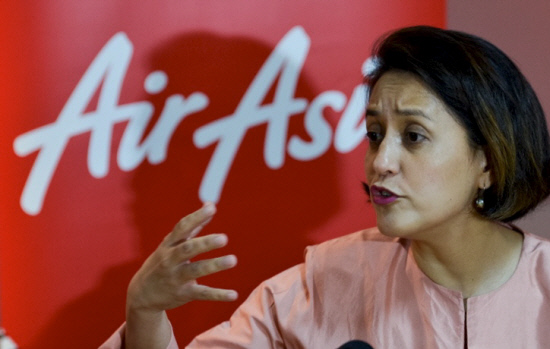 She alleged that klia2, which AirAsia has rebranded as LCCT2, is an “airport under construction”.

“Issues such as pounding and sinkholes are a daily problem. With tractors and workers moving all around to carry out repairs, its akin to a construction site,” she said.

She added that this has cost the airline millions of ringgit to repair aircraft due the damage caused by problems at klia2.

“I was informed that it would take at least five years for the soil to settle at klia2 thus costing the airline more money to upkeep its planes,” she said.

Aireen also lamented on the cost of doing business at klia2 as well as the bad planning at the airport.

She said the check-in counters are so close together that there is major congestion during the peak periods when some 40,000 people are using the airport, causing passengers to queue until the mall.

Furthermore, there are huge queues at the immigration area and this has resulted in passengers queuing up until close to the check-in area.

She said all this is down to the bad planning by MAHB, adding that the airline, a major tenant at the airport, was not consulted on the building of the airport but was only told about the building plans.

Aireen said AirAsia should have played a major role in building the airport as AirAsia and its subsidiaries accounted for 98% of all flights out of the airport.

She also expressed her disappointment over the condition of the airline headquarters at the old Low Cost Carrier Terminal.

She said they are paying RM260,000 a month to MAHB but no maintenance or proper upkeep is being carried out.

She added that construction work was being carried out for a logistics terminal but MAHB failed to inform them. She said the problem was made worse by the fact that AirAsia had to employ their own

cleaners, not only to keep the building clean, but also to move the debris away to allow its employees to get into the building.

Aireen said they were hoping to move into their new headquarters near klia2 by October as construction of the building would be completed in August.

“This now looks impossible because of MAHB. They were informed about the plans in August last year but they only started work on the link road this month and it will only be completed by November.

“MAHB is now trying to find ways to complete the road by October,” she said. She also pointed out that it was very difficult for AirAsia management to get a meeting with MAHB despite them being the biggest client at klia2.

Meanwhile, MAHB managing director Datuk Badlisham Ghazali said, “We cannot name a terminal at our whim and fancy as it was a registered name and the government named it as klia2 not MAHB.

“However, we cannot prevent them from calling it LCCT2 as it is freedom of speech, but they cannot put it on their tickets or counter notice board,” he told reporters here today.