Hybrid airline Malindo Air has become the first airline in Malaysia to provide onboard connectivity via its new Malindo WiFi and Malindo Mobile services on its Boeing 737-900ER aircraft. 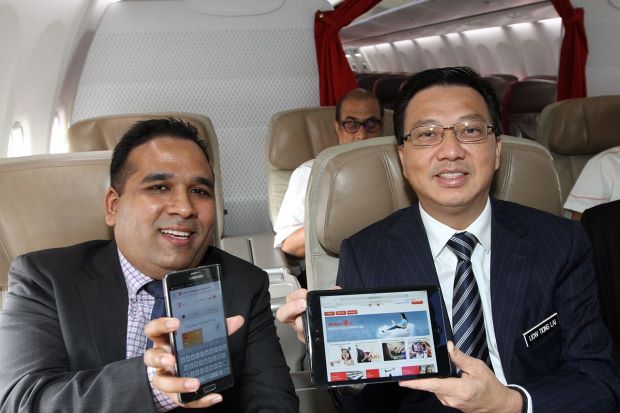 SURF IN THE AIR: Liow (right) and Chandran trying out Malindo Air's new in-flight connectivity services on board a plane during the launch of the services and the airline's in-flight magazine at klia2, Sepang. – SAMUEL ONG/The Star

"A WiFi-enabled fleet brings more than just operational benefits and we look forward to upgrading our location-based tracking systems to real-time tracking too in the near future," chief executive officer Chandran Rama Muthy said at the launch of the services as well as inflight magazine MalindoMag at klia2 by Transport Minister Datuk Seri Liow Tiong Lai here today.

Malindo WiFi and Malindo Mobile, now available on the busy Kota Kinabalu, Delhi and Mumbai sectors, are expected to be fitted on the rest of the fleet by year-end, he said.

Liow, noting that Internet access is no longer a luxury but a necessity for modern travellers, urged commercial aviation participants to continue to enhance their in-flight offerings. – Bernama