Passenger movements at Malaysia’s airports exceeded 80 million for the first time in 2014, growing +4.7% to 83.3 million. This lower-than-expected increase is a result of “the negative sentiment from the two major unprecedented Malaysia Airlines incidents” during the year, according to Malaysia Airports.

“The impact from MH370 was significant for the China sector and also sentiment more generally, as closure in the form of official incident findings seem to be elusive at this juncture,” said the airport operator, which manages five international gateways, 16 domestic airports, and 18 short take-off and landing ports across the country.

From an average of +27.0% year-on-year growth in the first three months of 2014, Chinese traffic deteriorated to an average of double-digit decreases in the last nine months, the peak of the contraction being a decline of nearly -20% in August.

In contrast, MH17 caused a dent in European traffic to Kuala Lumpur International Airport (KLIA) – Malaysia’s flagship gateway – and resultant flows to other airports both domestic and in Southeast Asia. From an average +9.0% year-on-year growth in the first seven months of 2014, European traffic deteriorated to an average decline of -1.9% in the last five months, the highest decline being -6.1%.

Middle Eastern traffic was also negatively affected during certain months in 2014, which Malaysia Airports attributed to geopolitical uncertainties and a temporary decline in Qatar Airways’ frequencies due to ongoing runway works at its home airport.

Encouragingly, all three sectors saw improvements at the end of the year. Overall passenger traffic grew by +0.3% to 8.2 million in December 2014, with the decline in Chinese traffic dropping to single digits whilst European traffic reached a positive level of +1.9%. The Middle East sector also recorded a high +24.0% growth in December, a month which continued to register the highest passenger movements as in previous years. 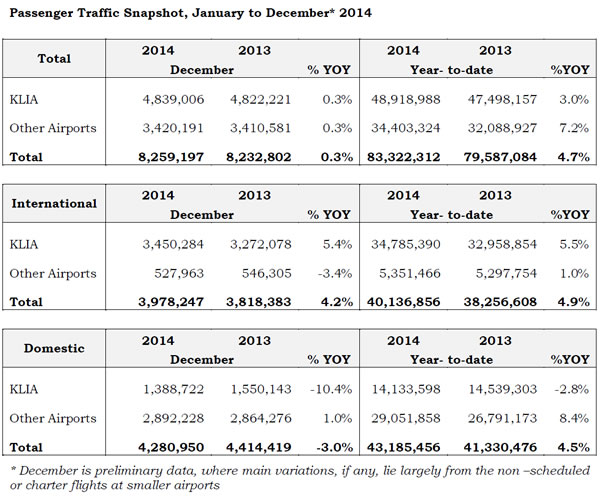 Prior to klia2’s commencement in May, KLIA Main recorded an average of +17.2% year-on-year growth up to April but it declined to -11.2% for the next eight months. The decline registered for KLIA Main was cemented by the expected transfer of Lion Air and Malindo Air operations to klia2.

In 2015, Malaysia Airports expects passenger traffic to hit 85.8 million, representing growth of +3.0% over 2014. This is based on the assumptions that GDP growth of +5% to +6% will hold, fuel prices remain stable at the current lower levels and that airlines' seat capacity supply remains in line with estimates of +5% above 2014. Aircraft movements is expected to grow along the passenger growth at about +3% in 2015.

The airport operator maintained that “there is room for further optimism” for 2015 with the opening of Southeast Asia’s largest modern outlet mall at KLIA in the middle of the year as well as the return of British Airways to Malaysia.

It added: “We also foresee another major carrier returning to Malaysia in 2015 underlying the strong fundamentals of KLIA and the airport system in Malaysia, despite the unprecedented triple airline incidents [the third being the tragic AirAsia QZ8501 crash in December –Ed] in 2014. It is also hoped that the restructured Malaysia Airlines will bring about positive growth to the industry.”