I was due to take a domestic flight out of klia2 at 10.20am, and understanding Murphy’s Law when it comes to first day blues, I decided to be there way earlier than normal.

I took a Skybus from KL Sentral around 6am, and noted that the bus fare remained the same (RM10 one way). 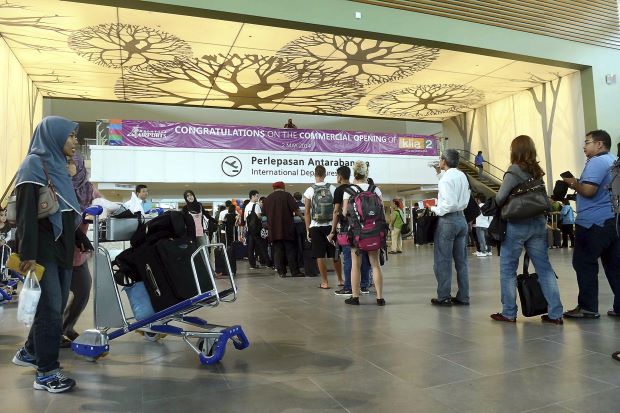 Passengers waiting to check in at klia2

The journey took 50 mins and we arrived at Level 1 of the swanky terminal a good three hours before my departure.

There were many AirAsia staff on hand to assist travellers at that level, but I only saw MAB staff offering assistance only on Level 2.

I was informed I could take the escalators to Level 3 for departure, or the lift. But here’s the catch – the lift only goes to Level 2.

After that, it’s a long walk and a series of escalators to get to the check-in area.

This is hardly welcoming, if not downright scary, if you’re in a rush.

Naturally, many passengers were grumbling audibly about this.

No problems at all with AirAsia counters as it only took me two minutes to drop off my bag.

Jonson Tan, 24, who was flying off to Manila, said when he was dropped off, he could not see any signs pointing to the check-in area, though he was happy with the check-in process as there was no queue.

Food and beverages proved to be a massive disappointment.

Other than fast food outlets, the other restaurants were quite expensive by the average salaryman’s standard.

As this is a terminal for budget flights, shouldn’t a food court be in place?

Many of the staff in the area expressed the same disappointment, noting that MAB had promised a food court once AirAsia moved in.

From where I stood, I could see that the immigration people were coping well with the number of travellers on the international departure side.

But apparently, it’s still Malaysia Boleh when to comes to toilets. The gents were all waterlogged, and this was only after three days of operations.

My other lament is that there are no electrical sockets at the departure gate area, so make sure your devices are fully charged beforehand – or else, you would have to patronise one of the restaurants there to juice up your device.

Other than these, it was still a very pleasant surprise to see things running smoothly overall.