TOUCH DOWN: 1st foreign flight is from Vietnam

AIRASIA officially marked its operations at the  new klia2 airport yesterday with the arrival of its first  international flight, AK 539, from Hi Chi Minh City, Vietnam. 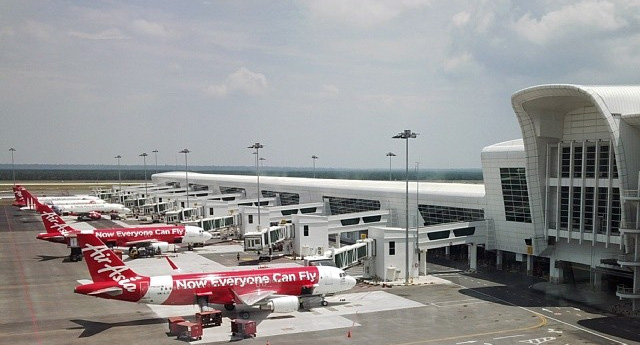 AirAsia at the klia2

The first domestic AirAsia flight to touch down at klia2 was AK6311, from Langkawi, at 4.30pm.

Twenty seven of AirAsia's scheduled flights arrived at klia2 yesterday, with another 15 in the early hours of today.

Of the total 42 flights, 21 were international and the remaining, domestic flights.

The last flight to take off from the Low-Cost Carrier Terminal (LCCT) here was flight D7170 at 2.35am today to Jeddah, Saudi Arabia.

The budget airline has been operating at LCCT since 2006.

The airline's first flight to take off from klia2 was flight D70236 to Perth, Australia, after midnight today.

At LCCT last night, Aireen said the move has a bittersweet moment for the staff and personnel who had worked at LCCT since 2006.

"The move should be a boost to the staff to provide better services, taking into account the bigger facilities at klia2," she said before taking a group photo to mark the historic move to klia2.

"(The) LCCT is one of the best terminals in the world, but there is room for improvement, which I think will be addressed by the new klia2," said Utpal, who is frequent flyer, with about 20 flights a year.

Following its move to klia2, AirAsia, said its Red Carpet service would be suspended for six weeks from today.

"This is to allow our contractors to complete their works for our lounge facilities and ensure full operational readiness for klia2."

It said passengers who had opted for the Red Carpet service for outbound journeys from Kuala Lumpur would be entitled to a credit shell for the fees paid, while inbound passengers remained unaffected. Additional reporting by Hariz Mohd.