An airport apron is the area where aircraft are parked for loading or unloading passengers or cargo, refuelling, parking or maintenance.

The video clip which Pua shared on his Facebook page was uploaded today in YouTube by a user identified as Zul Caprice although it is not clear as to who had actually recorded the video.

In the video, several workers were seen scooping the water with pails into a drain while supervised by a local female staff wearing a Malaysia Airports Holdings Bhd (MAHB) vest.

Another female staff, wearing a vest with the word “Risk Management”, was recording the scene with a smartphone.

After a while, the female staff with the MAHB vest ordered the workers to stop to prevent a traffic jam.

In his Facebook posting, the Petaling Jaya Utara Member of Parliament pointed out that the airport cost RM4 billion and was completed after a delay of two years.

It was initially scheduled to open in April 2012. The airport, designed to cater 45 million passengers a year, opened in May 2014.

“Can you believe it?” Pua asked.

Pua had previously highlighted that the airport’s initial budget was only RM1.7 billion when it was first announced in July 2007 by Datuk Seri Ong Tee Keat, who was then Transport Minister. 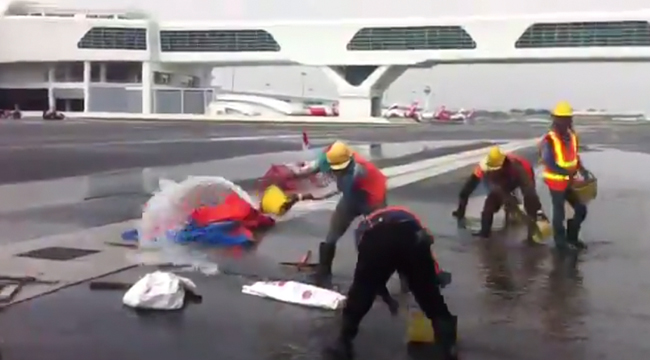 A screen grab of the 19-second video clip. — Picture courtesy of YouTube

The video can be viewed here: