COMPLIMENTARY SERVICE: Register at www.KLIAekspres.com from tomorrow, 23 Apr 2014, onwards for a free ride on the KLIA Express to Kuala Lumpur International Airport 2 (klia2)

Members of the public who are keen to visit the new Kuala Lumpur International Airport 2 (klia2) can get a free ride on the KLIA Ekspres from KL Sentral Station on Sunday. 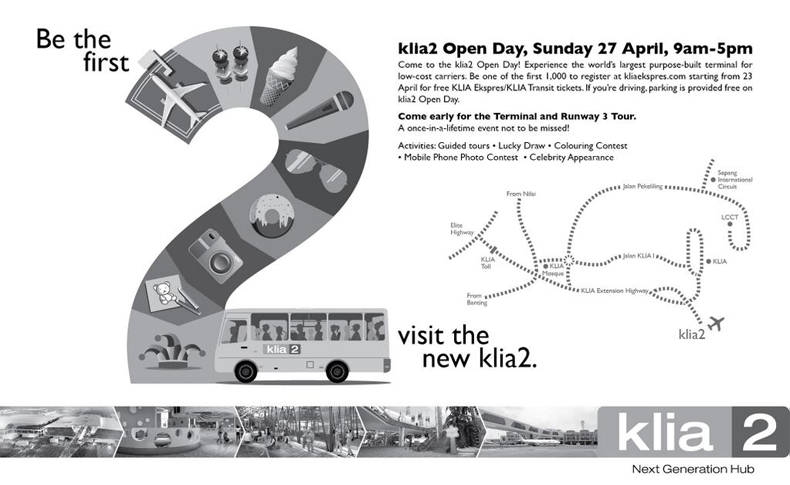 The complimentary ride, which is offered to the first 1,000 passengers, is held in conjunction with Malaysia Airports Holdings Bhd's open day at the terminal.

"They will receive an e-ticket upon confirmation of their registration. The tickets will be available on a first-come, first- served basis through the website," she said.

Noormah said ERL was ready to welcome passengers to klia2 when the new terminal opened its doors to the public on May 2.

"It has been almost eight years since the low-cost carriers were moved from KLIA to the Low-Cost Carrier Terminal.

"With the move back to klia2, we are ready to welcome passengers flying with these low-cost carriers onboard KLIA Ekspres, where they can enjoy the fastest airport transfer in Kuala Lumpur.

"The journey from KL Sentral Station to klia2 takes only 33 minutes, while KL Sentral to KLIA is 28 minutes," she said.

The fare to klia2 from KL Sentral is the same as the fare to KLIA from the station, which is RM35 for one-way and RM70 for a return trip.

Syed Hamid said passengers would have no problems travelling to the terminal, thanks to ERL.

"Travellers will be able to travel to klia2 directly by train with ease and comfort, and faster than any other mode of road transport," he said.

As for the taxi service at klia2, Syed Hamid is asking city taxis to the new terminal be "presentable".

"These taxis can present a good image of Malaysia to passengers, especially tourists.

"The perception of passengers, either good or otherwise, is formed when they use taxis and interact with drivers," he said.

He advised taxi drivers who did not get passengers to refrain from waiting at the new airport.

"Instead of waiting, maybe they can go somewhere else and they will get passengers," he said.

The new klia2, which is about 1.5km from the main terminal of KLIA is expected to cater to approximately 25,000 passengers daily.