The first AirAsia plane to land in klia2 features a livery design that’s inspired by creative folks from the region.

Krittaphong Wongsachai was beyond ecstatic and perhaps a little awestruck the first time he laid eyes on the AirAsia BIG plane. A perfectly valid reaction, considering how his portrait caricature was blown up and incorporated into the livery design of an Airbus A320.

The Bangkok native had participated in a social media contest on the low-cost carrier loyalty programme’s Facebook page, submitting a livery design inspired by the koi fish. Krittaphong’s design beat 50 other entries and won the grand prize, garnering more than 500 votes from social media users. 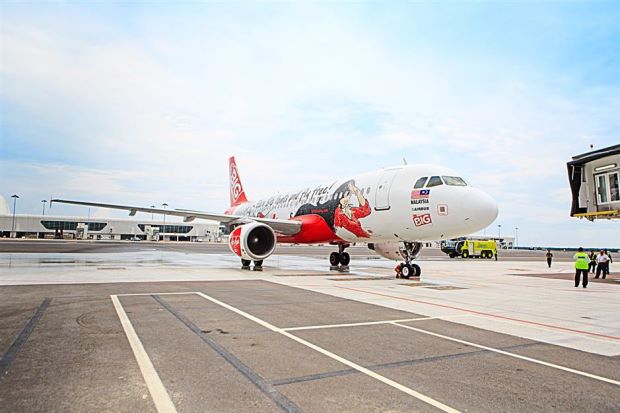 Epic touchdown: The BIG plane made history when it became the first AirAsia plane to land in klia2. 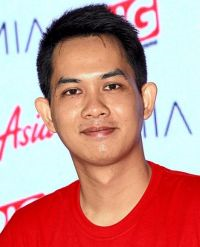 Krittaphong Wongsachai from Bangkok took home the grand prize and had his portrait caricature featured on a BIG plane.

“The koi is believed to be a lucky fish in Asian culture, having the power to enhance lives and bring auspiciousness,” the 27-year-old says of his winning design.

He adds that the fish is also recognisable for its red and white hues, which also happens to be the colours associated with AirAsia.

Krittaphong (who works on computer graphics for flight simulators), walked away with 100,000 BIG points (equivalent to three complimentary return flights from Bangkok to Hong Kong).

Also, of course, the opportunity to have an illustration of himself superimposed onto the plane which plies both domestic and regional routes.

The win was made more significant when it became the first AirAsia plane to land in Kuala Lumpur International Airport2 (klia2) in May. The aircraft had flown in from Ho Chi Minh, Vietnam. 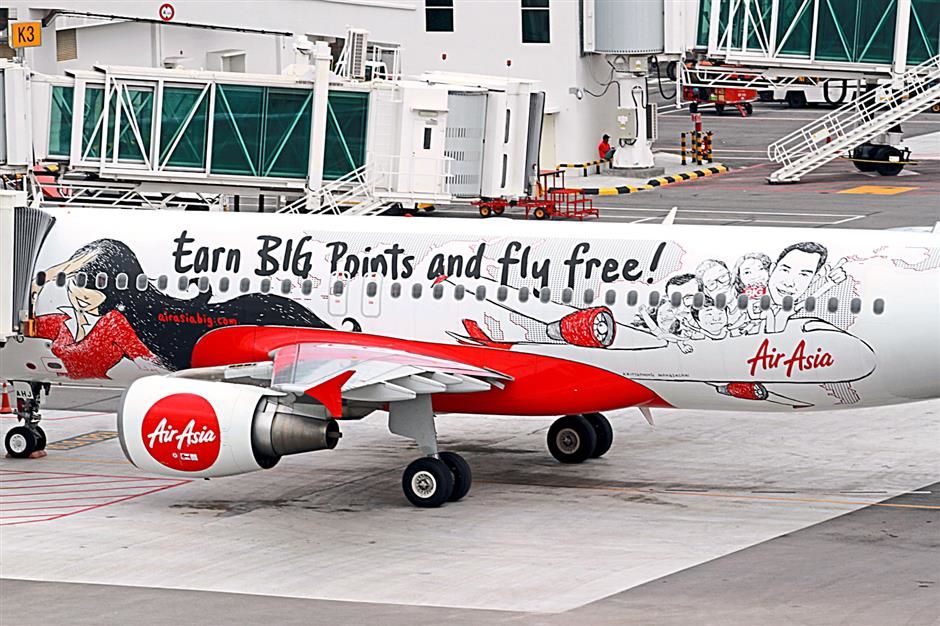 The portrait caricatures of the winners can be seen near the tail of the BIG plane.

Graphic design student Mohd Afiq, 23, believes that this exposure will give him a huge boost in his art portfolio.

He adds that being one of the Top 6 entries from among 50 other competitors made it a truly sweet victory.

Local artist Cheeming Boey, 37, was commissioned for the caricatures. Best known for his illustrations on foam coffee cups and the daily webcomic iamboey, the artist was also tasked with the overall livery design of the BIG plane.

Boey admits that it was quite unnerving for him to make the transition from disposable cups and a virtual template to a full-scale airplane. 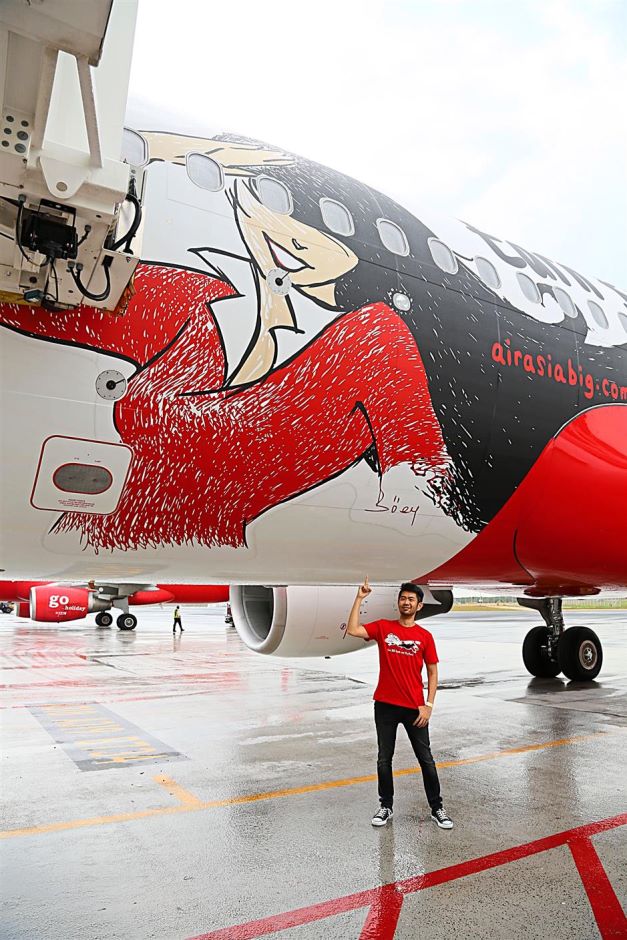 Cheeming Boey posing in front of his work of art

“A cup and a web comic is very small compared to an aircraft. Every detail is amplified on the latter. This is the biggest canvas I’ve ever worked on,” says the computer animation graduate.

It doesn’t help that prior to his involvement in the project, he hadn’t done many illustrations for a long period of time; his webcomic consists primarily of casual doodles.

The artist took approximately two months to complete that design.

Apart from the caricatures of the winners, the BIG plane also features a striking image of a female flight attendant who’s known as the AirAsia Girl.

“I was drawn to the vintage element of the pin-up girl. It used to be so popular in the past, but it’s underplayed these days,” says Boey. 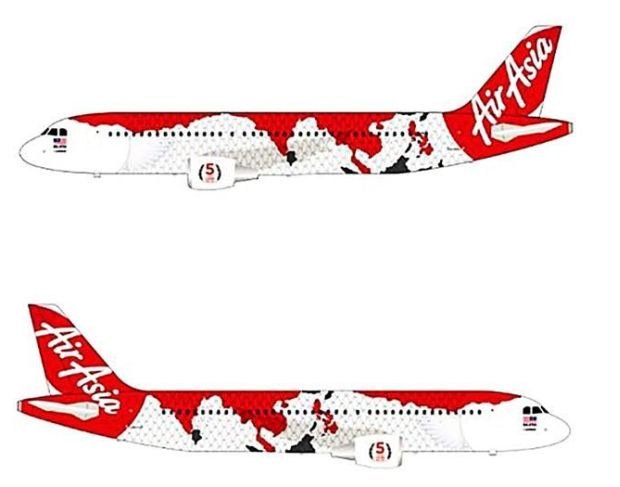 He adds that the project helped showcase his versatility as an artist. Ultimately, he aspires to put Malaysian art on the map and, with the BIG plane’s livery design, that dream is taking on a literal meaning as the aircraft takes to the skies.

According to AirAsia BIG Loyalty Programme chief operating officer Alice Goh, 49, this marks the first time the BIG logo appears on a plane livery and the airline is excited to partner with Boey.

“The caricatures of the winners against a world map shows that we are all about allowing our members to fly more, and this is one of the ways we engage and reward them,” says Goh.

“Our new tagline ‘Earn BIG points and fly free’, which is featured on the plane, reflects our determination to inspire new dreams and offer travel opportunities to our BIG members,” she adds.

The new livery design also heralds the loyalty programme’s strategy of focusing on the “Visiting Friends and Relatives” category, which happens to make up the largest segment of guests who fly on the low-cost carrier. 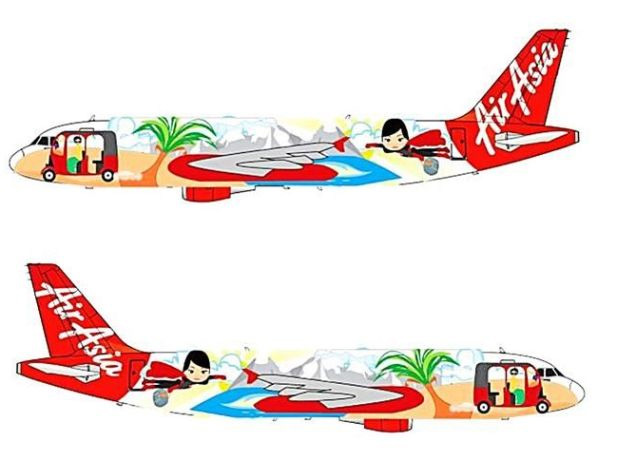 “Whether it’s your parents in the kampung, a cousin in a different state or a long-lost friend in another part of the world, the new BIG strategy aspires to bring you closer to your loved ones,” Goh explains.

As part of the new brand strategy, AirAsia and BIG merged their members’ database, resulting in an estimated growth of members to over 10 million.

This venture includes an automatic upgrade of AirAsia members to BIG members (also known as “BIG Shots”) which allows them to earn and redeem points on AirAsia flights as well as the programme’s partners around the region.

Goh hopes the unveiling of the creative livery and new direction forward will distinguish the airline in the minds of frequent flyers around the world.

She’s not discounting the idea of more collaborations with other local artists.

“We’re always looking for creative initiatives to tell the AirAsia story, and it’s exciting to present it through art,” says Goh.