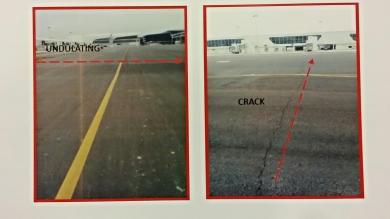 The Department of Civil Aviation (DCA) has denied allegations of cracks on the taxiway, apron and aircraft bay of the new klia2 budget terminal.

Instead, its director-general Datuk Azharuddin Abdul Rahman was quoted by Bernama as saying today that they were only “depressions” and not cracks.

He questioned if the pictures of the  ‘cracks’ on the taxiway published by an online news portal were authentic.

Yesterday, The Malaysian Insider published five photographs taken recently showing cracks and undulating surface in the taxiway leading to the 3.96km runway, apart from cracks in the aircraft apron and bay areas.

"The taxiway is crucial because as it is, there are more than 300 take-offs and landings in the current low-cost carrier terminal with fully loaded planes. Any cracks will be a safety concern for airlines landing there," a source had told The Malaysian Insider.

However, Azharuddin today said that those were not the latest photographs, adding that klia2 was safe overall.

He said that rectification would be completed before the May 2 opening of klia2.

"The cracks are superficial. They are not structural, so there are no safety concerns here.

"As for the runways, we inspected them yesterday and there were no cracks or major defects and we are satisfied,” he was quoted by Bernama as saying.

Azharuddin said that in a simulation exercise, carried out recently to test if the aircraft apron and bays could withstand heavy loads, found that they met the requirements for even bigger aircraft.

"We had talks with Malaysia Airport Holdings Bhd (MAHB) and they will rectify whatever is necessary before the airport begins operations," he said, according to Bernama.

He also said that the final inspection would be carried out on March 5.

The airport terminal has faced almost a year of delays that has led to a war of words between its main client, AirAsia founder Tan Sri Tony  Fernandes, and acting Transport Minister Datuk Seri Hishammuddin Hussein.

Hishammuddin said over the weekend that interested parties should cease finger-pointing and put national and the people’s interests first by meeting the stipulated operational date.

"They picked the date, not the government, because it is a private commercial venture. So, they must be responsible.

"I had been promised the operational date of May 2 can be met," he told reporters in Kajang on Sunday.

A day earlier, Fernandes took to his Twitter account to hit out at MAHB and Hishammuddin over klia2’s ballooning cost and airport taxes.

Fernandes tweeted: “Let’s be clear. Malaysian Airports is a monopoly. My concern is making sure they keep costs down for the Malaysian public.

“We created low-cost travel. We did not ask for a RM4 billion terminal that is 3 years late. The present terminal LCCT costs RM250 million.”

klia2 has missed several deadlines for its opening, with the last one scheduled for April 30 before being moved to May 2.