Malaysia Airports Holdings Berhad (MAHB) has reported a +3.8% increase in passenger movements to 7.2 million in June 2014 – a record high in the year to date.

International traffic at Malaysia’s airports grew by +2.0% while the domestic sector registered a more robust +5.4% growth over the same period last year. This traffic performance is “commendable”, MAHB noted, considering it was achieved over a solid +21.5% growth in June 2013.

Several factors have caused a decline in the feeder traffic (of transit/transfer passengers) from KLIA to other MAHB airports, including political uncertainties in Thailand, lower visitor numbers from China, escalating conflict in the Middle East, and capacity cuts by Singapore-based carriers. 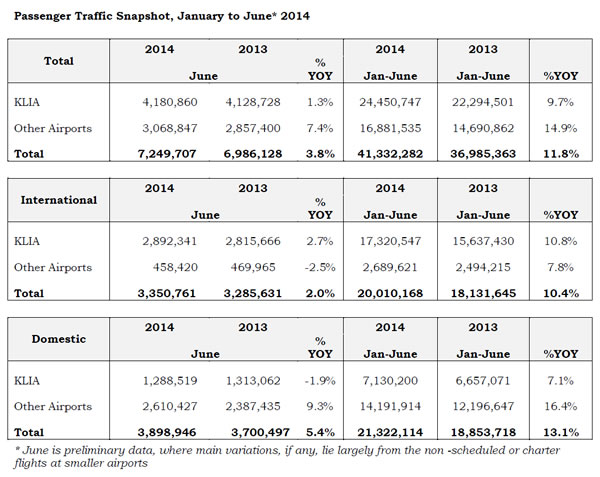 Traffic at KLIA’s main terminal (KLIA-Main) fell by -8.3% while klia2 grew by +12.8%, partly due to the shift of Lion Air and Malindo Airways from KLIA-Main to klia2 on 2 May 2014. On a like-for-like comparison assuming the same airlines operating then and now, KLIA-Main traffic declined by -4.5% while klia2 grew by +7.6% in the month of June 2014.

Compared to the previous KLIA-Low Cost Carrier Terminal (LCCT), the new klia2 managed more passengers than KLIA-Main in June, an achievement made possible by the new terminal’s bigger size and the larger number of airlines now operating there. However, there were still more international passengers in KLIA-Main compared to klia2 during the month, MAHB noted.

Conversely, the mixed performance at KLIA was mitigated by more direct domestic flights from other MAHB airports which registered a total passenger growth of +9.3% over June 2013.