A five-man independent audit committee formed by the Transport Ministry will investigate the problems of sinking and ponding, among others, at klia2.

Minister Datuk Seri Liow Tiong Lai said he expected a report from the committee to be out by the first half of 2015, promising action upon its release.

“I’ll expect a report from the independent committee, then I will take action (based) on whatever report (has been made),” Liow said at klia2 here.

He had earlier made his first official visit to the airport since assuming the minister’s post in June.

He added that the committee would be headed by Federation of Engineering Institutions of Asia and Pacific (FEIAP) president Prof Datuk Dr Chuah Hean Teik. 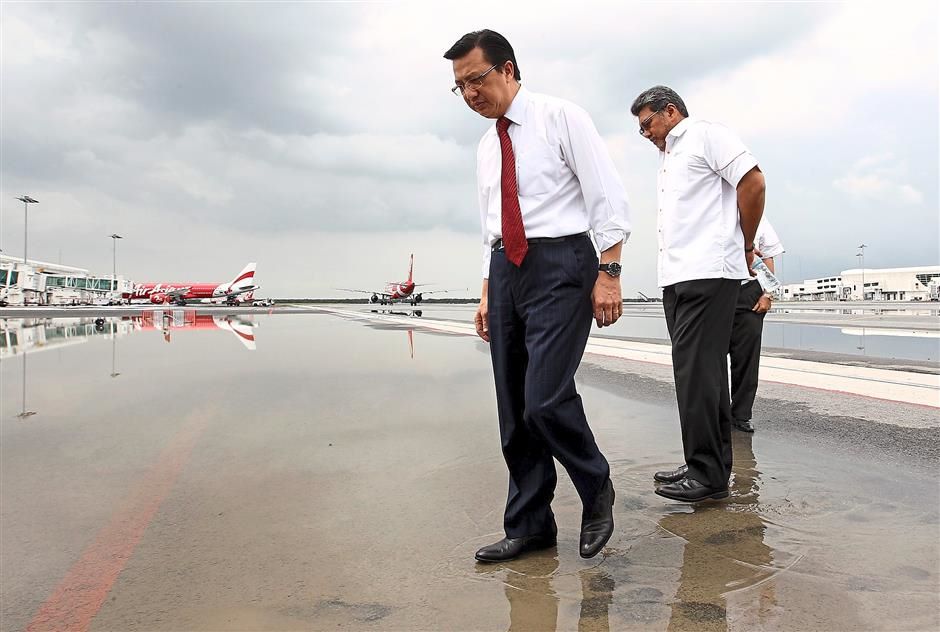 Check-up: Liow (left) inspecting the waterlogged tarmac of the taxiway with Badlisham during his visit to klia2 in Sepang. -MOHD SAHAR MISNI / The Star

Liow said the report would be made public and action would be taken against klia2 contractors if found responsible for unsatisfactory work.

These included cost overruns from RM1.7bil to RM4bil and that original plans to replace the previous Low-Cost Carrier Terminal (LCCT) were not followed.

“I am confident that MAHB will answer all the queries (by PAC),” Liow said.

He added that MAHB would be taking immediate action on the matters affecting the airport.

He said the airport was not having any safety issues and although it suffered ponding (unwanted pooling of water), klia2 could still run smoothly, adding that two gates were closed.

MAHB managing director Datuk Badlisham Ghazali said repair works on the klia2 taxiways and apron were expected to be completed by the first quarter of 2016.

He said the repair works which started in June were about 25% done.

Badlisham said there were 68 aircraft bays, which were enough to handle all the airlines there.