klia2 just cannot get a break.

Old pictures of cracks on the apron are being circulated online but officials say those fractures on the tarmac have already been patched up. 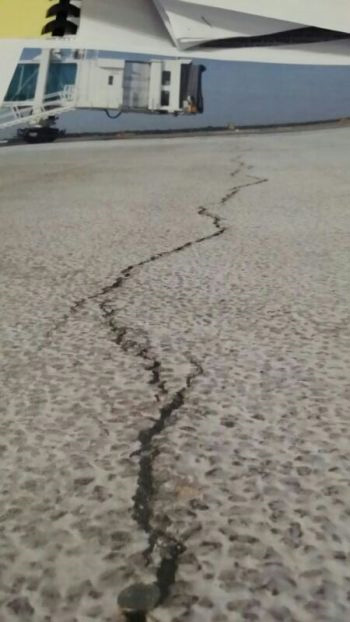 All patched up: Old pictures of cracks at klia2 tarmac allegedly circulated online.

Aprons are used by airports for parking of aircraft and the pictures are about two months old.

The pictures, made available to The Star yesterday, show cracks as wide as a 20 sen coin.

The Star highlighted them in a Feb 5 report that the new airport had failed in its fitness test.

“These are the same pictures making their rounds. The cracks are in the area where there are underground pipes and, naturally, it will take time for the soil to settle.

“It is no cause for concern and the apron is just a place to park aircraft,” said a source.

Another source added: “There appears to be a malicious attempt by some parties to make sure klia2 does not open on May 2.

“The cracks are not new and have been patched up and it is also normal for airports to have these type of cracks.

“There are cracks even in Runway 1 and 2 at KLIA, and they are patched up whenever they appear.”

However, the Government is expected to clarify the issue soon.

In its report on Feb 2, The Star said about two-thirds of the main terminal building at klia2 had not got the nod from the relevant authorities.

Indah Water Konsortium Sdn Bhd, the Sepang Municipal Council and the Fire and Rescue Department inspected the building last month and found that 65% of the main terminal did not comply with fire and safety standards.

There were cracks in a sewerage pipe outside the terminal and parts of the road and drainage were not fit for use.

Their recommendation is essential for the issuance of the Certificate of Completion and Compliance.