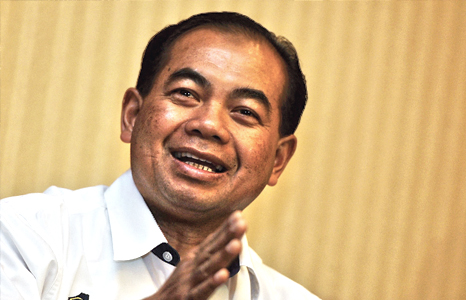 The inflated cost was due to increase in construction work scopes in the process of airport building, after several opening delays, says Abdul Aziz. (Pic by Hafzi Mohamed)

The final cost is slightly above RM4 billion, with the cost details set to be included in a report by airport operator Malaysia Airports Holdings Bhd (MAHB) to be presented to the Ministry of Transport.

Deputy Transport Minister Datuk Abdul Aziz Kaprawi told The Malaysian Reserve that the cost-overrun would be borne by MAHB.

“The real cost can only be known after the opening. They (MAHB) will compile everything in a report and pass it to me once the airport is operational.

“From what I know and have seen so far, there is a slight (cost) increase. But it will not affect MAHB’s financial performance,” he said.

He did not state the amount but informed sources told the paper the final bill estimate could rise between RM100 million and RM200 million.

Abdul Aziz said the inflated cost was due to increase in construction work scopes in the process of airport building, after several opening delays.

However, he stressed that the rise in job scopes will not defer the operational date of klia2, slated for May 2 this year.

“I have been monitoring everything and all preparations are underway and on-track to meet the deadline,” he said, while dismissing claims that May 2 would be the “soft launch” of the airport.

Malaysia’s first hybrid terminal, klia2 – built to accommodate 45 million passengers annually – was initially set to open in September 2011 but the date has been delayed five times with the latest deadline to be operational by May 2.

Its initial budget of RM1.6 billion has since ballooned to RM4 billion. The latest figures would only be revealed after the completion of the project, according to Acting Transport Minister Datuk Seri Hishamuddin Hussein.

The contractors of the main terminal building, a UEM-Bina Puri joint venture, had failed to secure the certificate of completion and compliance by end-February.

The delay in securing the certificate of fitness is feared to result in the sixth delay of the airport’s opening deadline.

However, MAHB and the Transport Ministry had on many occasions dismissed possibilities of a sixth delay, while repeating that klia2 will be open on May 2, as set by Prime Minister Datuk Seri Mohd Najib Razak.