The total cost for building the mega-hybrid airport klia2, which began operations on May 2, is RM4.5 billion which ballooned from the last capped budget of RM4 billion.

The bank interests for the financing were initially frozen, and were only ammortised after the completion of the airport, he told a media briefing yesterday.

“To build an airport, we need financing and the interest for the loans will only be recognised after the completion of the project.

“Until then, the interest was not part of our profit and loss account,” he pointed out.

Malaysia’s first hybrid terminal, klia2 — built to accommodate 45 million passengers annually — was initially set to open in September 2011 but the date was delayed five times with the final deadline set on May 2.

Its initial budget of RM1.6 billion has since ballooned to RM4 billion, with former acting Transport Minister Datuk Seri Hishammuddin Hussein saying that the final cost figures would only be revealed after the completion of the project.

Analysts had predicted the final cost to be around RM4.2 billion.

Faizal said since the opening of klia2, MAHB had received many complaints and criticisms on the long walkways in the terminal building, thus the MAHB board has approved RM20 million to install more walkalators from immigration clearance to the boarding gates.

“We take into consideration all concerns raised by all stakeholders including the passengers. We are doing our best.

But if there is still anyone not happy with klia2, they can go back to LCCT.

“We are expecting to install an additional 10 to 20 more walkalators. It will be done in phases,” he added. 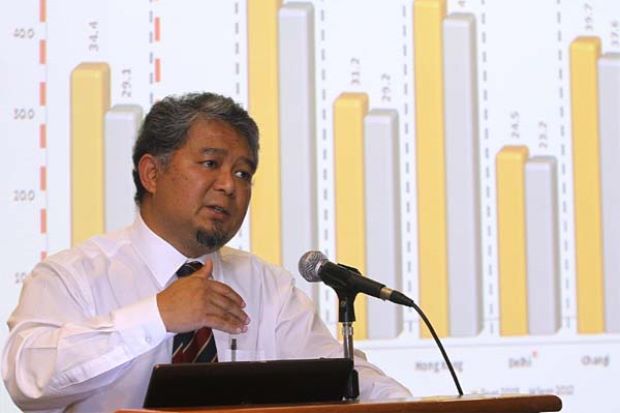 AIRPORT BUILT TO ACCOMMODATE 45M PASSENGERS: Malaysia Airports Holdings Bhd CFO Faizal Mansor announcing its financial results for 2Q of 2014. The total cost for building the mega-hybrid airport klia2, which began operations on May 2, is RM4.5b, which ballooned from the last capped budget of RM4b.

Meanwhile, MAHB reported a surprising net loss of RM44.67 million for the second-quarter (2Q) ended June 30, 2014 from a profit of RM101.75 million for the corresponding quarter last year.

In contrast, the airport operator reported higher revenue of RM1.175 billion for the quarter from RM978.102 million, previously.

Faizal said the loss was mainly due to a higher share of associate losses, higher depreciation and amortisation, higher operating costs, higher finance cost and impairment of investment.

“Higher depreciation and amortisation was due to the capitalisation of newly completed projects, mainly klia2, while higher utility charges as with the new electricity tariffs affected us quite badly.

“About RM80.2 million was spent on higher consumption and the tariff hike, 48.6% higher than what we spent the corresponding quarter last year,” he added.