The International Civil Aviation Organisation (ICAO) has verified that klia2 is structurally in compliance with its requirements and safety standards. 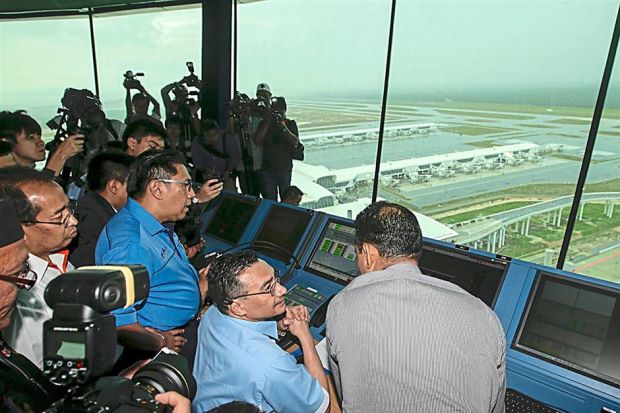 He said the ICAO report, which was handed to him early this week, was tabled at the Cabinet meeting on Wednesday.

The ICAO arrived on April 14 at the invitation of the Government to evaluate if there were structural issues with the airport following AirAsia’s dissatisfaction on the matter, particularly depressions on the apron and runway.

On April 18, the critical document – Certificate of Completion and Compliance (CCC) – which certifies the new airport fit for public use was handed to airport operator, Malaysia Airports Holdings Bhd (MAHB).

“Everything has been sorted out and the Air Traffic Control Tower (ATCT) for klia2 is now officially in the hands of the Department of Civil Aviation (DCA).

“This is a key milestone en route to the operation of klia2 next Friday,” he said at a press conference after witnessing the handing over from MAHB at klia2 ATCT here yesterday.

The ATCT, which will be called Tower West, has been recognised by the Guinness World Record as the tallest in the world, standing at 141.9m above sea level.

The height of the RM55mil tower beats the 132.2m tall air traffic control tower at Suvarnabhumi International Airport in Thailand, the second tallest in the world.

Hishammuddin said Tower West would monitor the operation of Air Traffic Control for klia2 and Runway 3 as well as serve as a back up ATCT in case of emergencies at KLIA’s Tower East.

To mark the event, Hishammuddin, with the assistance of air traffic controllers, also directed the simultaneous landing of two commercial Malaysia Airlines jets at the parallel Runway 2 and Runway 3.

When asked how he felt about giving the landing clearance to both aircraft, Hishammuddin said:

“I feel good for the first time in many weeks. I think it is something that we can celebrate after going through quite a tough few weeks,” he said.

The new terminal is to open its doors to the public on May 2 and Hishammuddin said he had also indicated to the Cabinet that the official opening could be held on June 2.