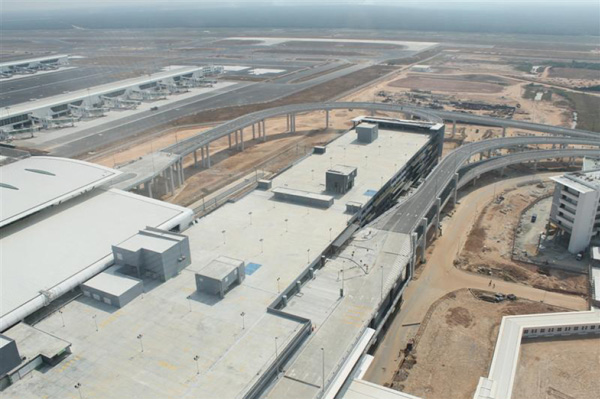 klia2, Construction picture as at 13 February 2014

The main contractor – a UEM Construction Sdn Bhd and Bina Puri Sdn Bhd joint venture – has, therefore, met its deadline for the handover.

What is left to be done before the Operational Readiness and Airport Transfer (ORAT) process can begin are rectification works on the problems that had delayed the handing over last month, as well as finishing works, such as the beautification of the internal part of the airport.

Sources said the RM4 billion project is still on track for its official opening on May 2.

They said although the main terminal building had been delivered, MAHB would only obtain the Certificate of Completion and Compliance (CCC) by April, which is when the sewerage work rectification is expected to be completed.

The CCC will mean the main terminal building is safe to be occupied by the public.

"The ideal situation is to have the CCC and CPC (Certificate of Practical Completion) for the ORAT to be carried out uninterrupted.

"However, MAHB is forced to compromise to carry out ORAT with many constraints.

"Although there is no CCC, ORAT with stakeholders will continue as long as the safety letter of recommendation from the Fire and Rescue Department is obtained," a source explained.

The various stakeholders, including government agencies such as the Immigration Department and the Customs Department and retailers and airlines, are expected to participate in the ORAT process by Monday.

ORAT is the rehearsal of airport operations. The preliminary ORAT, or the first phase of the testing of equipments and facilities, was conducted internally by MAHB without involving other stakeholders.

UEMC-Bina Puri was supposed to deliver klia2’s main terminal building on January 31. However, it had to be rescheduled due to several issues that had cropped up during the inspection by the Fire and Rescue Department last month.

The issues included the rectification of the sewerage pipeline and completion of road and drainage systems, smoke extraction system as well as escape route signage and facilities.

Due to this, the department, Sepang City Council and Indah Water Konsortium were unable to issue a letter of recommendation to the project consultants for the issuance of the CCC.