Malaysia Airports Holdings Bhd (MAHB) is expected to receive the Certificate of Completion and Compliance (CCC) for the soon-to-be-opened Kuala Lumpur Internatonal Airport 2 (klia2) this week, indicating that the new terminal is safe to be occupied.

It is learnt that the new terminal is undergoing another round of inspection by several consultants, which are expected to issue the certificate before Sunday. 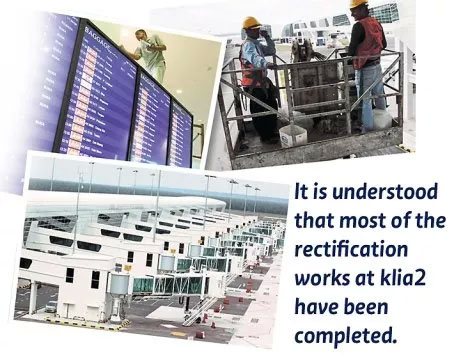 This makes it the first airport in the world to be inspected by the United Nations agency.

A source told Business Times yesterday that ICAO representatives have been briefed by MAHB on the overall development of klia2.

The source added that ICAO will inspect the airport based on its Annex 14 requirements, together with the Malaysian Department of Civil Aviation (DCA).

The ICAO Annex 14 contains standards and recommended practices that prescribe physical and operational characteristics of airports to ensure their safety and security levels.

Business Times also understands that most of the rectification works on the cracks of klia2’s taxiway/apron have been completed.

Also, the rectification of its sewerage pipeline as well as the completion of its road and drainage systems, smoke extraction system and escape route signages and facilities are weekalso done.

The safety and security of klia2, which is set to open on May 2, came under intense scrutiny again after AirAsia Bhd said in a statement earlier this month that it would not move to the new airport until some issues pertaining to its safety were addressed.

IPC is an independent consultancy company appointed by the government to look at the safety of klia2’s taxiway/apron, runway and surrounding areas.

However, DCA director-general Datuk Azharuddin Abdul Rahman said in February the depressions were due to soil settlement and were being rectified.

He added that they did not pose any safety risks.