IN the game of corporate “tai chi”, or the skill to push responsibility over to another party, it is a never ending game. 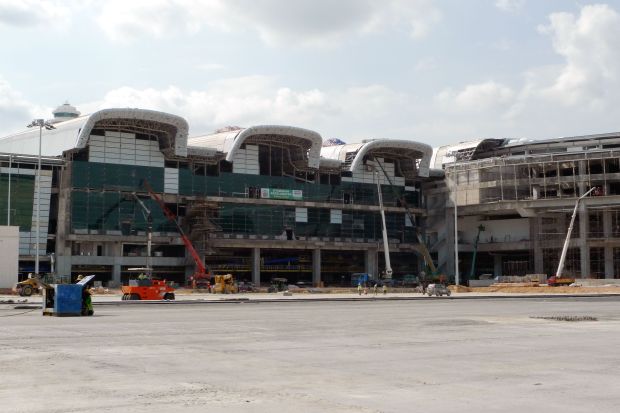 Some have honed the skill to an art form. In the case of the public spat between Malaysia Airports Holdings Bhd (MAHB) and its klia2 main contractors, UEMC-Bina Puri joint venture, it is more than just finger-pointing. The spat has resulted in a RM60mil fine on the main contractors.

MAHB is pointing the gun at UEMC-Bina Puri for the delayed completion of klia2, which was due to the delayed works of the main terminal that currently stands at about 93%.

According to MAHB operations senior general manager Datuk Azmi Murad , the last-minute instructions are just minor changes needed by stakeholders, and this doesn’t affect the completion date of the seven sectors of the terminal itself.

Among the requests are the addition of 45 more immigration counters, and additional ticket booths and counters.

“The instructions for the immigration counters are a valid point, and the contractors can apply for extension of time (EOT) to justify the extension. This may take only a further two to four weeks to complete, but does not justify an EOT for one year. The JV already has enough time to complete the works before June,” he says.

He says the previous periods of extensions were not conjured up from thin air, as all are mutually agreed and planned by parties involved including consultants, and the main contractors.

On Thursday in an interview with StarBiz, Bina Puri Construction Sdn Bhd director Henry Tee Hock Hin said the JV company would be appealing against the LAD, as the delay was due to last-minute changes by MAHB. He also said there should be a design freeze on the terminal, but the main contractor had been very accommodative on the changes. UEMC-Bina Puri’s work totalled about RM1.15bil out of the RM4bil projected cost of klia2.

UEMC-Bina Puri was given an extension before this to complete the terminal after MAHB accommodated AirAsia Bhd to change to an automated baggage handling system, that compelled the main contractors to dig an entire floor the size of a football field, hence the time completion was revised previously.

Besides the incomplete terminal, the taxiway and the new Runway 3 are also unfinished, which according to MAHB would not prevent klia2 from a delayed opening as it can direct air traffic to klia2 via the existing Runway 2, assuming if the terminal was operational.

First envisioned to become a low cost carrier terminal (LCCT) with a price tag of RM1.9bil, it has ballooned to RM4bil featuring state-of-the-art specifications. It is a LCCT but definitely not a low cost terminal. The grand launch planned to coincide with the 15th anniversary of the Kuala Lumpur International Airport yesterday is just empty hope. Despite the perceived delays right now, MAHB and the main contractors are on common ground.

Both parties are of the opinion that the show must go on, and construction will still need to be completed.

With a timeline to complete physical works by November, and given another six months to secure the certificate of completion and compliance (CCC) and operational readiness and Airport Transfer (ORAT), klia2 looks set to open in May next year. But, a spanner could be thrown in the works if there are more delays to the other packages.

So who’s to be blamed?