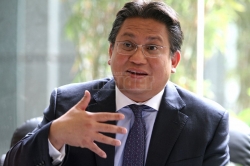 The Public Accounts Committee (PAC) will look into Khazanah Nasional Bhd’s role in delays and rising costs of the klia2 project and the Malaysia Airlines–AirAsia share swap that led to a RM20 million anti-trust fine, says its chairman Datuk Nur Jazlan Mohamed (pic).

He said PAC will probe the roles of consultants and merchant bankers in these deals although both MAS and MAHB are public listed companies with state asset manager Khazanah as the main shareholder.

“Khazanah should not rely solely on consultants for advice,” Nur Jazlan told The Malaysian Insider in Kuala Lumpur, adding the consultants were only motivated by profit and at times overlooked the laws governing a transaction

“The deal should not have happened in the first place to avoid these losses. In fact, the Auditor-General, for the first time, is already doing audit on Khazanah, even before PAC brought this issue up,” said the accountant by training.

The klia2 project was initially budgeted at RM1.6 billion but has now grown into a RM4-billion project after several amendments. It was initially slated to open in September 2011 but has been delayed five times and is now expected to be ready by April 2014.

Media reports say MAHB has received a staggering 230 non-compliance reports for the budget terminal, including cracks in the buildings as well as ceilings that were built too low, requiring them to be torn down and rebuilt.

In the case of the airlines, the Malaysian Competition Commission (MyCC) imposed a fine of RM10 million each on national carrier MAS and Asia’s largest budget airline, AirAsia, for monopolising four routes during their short-lived eight-month pact.

Both airlines have up to October to appeal the fines.

Nur Jazlan pointed out the Auditor-General has the powers to probe Khazanah although most of its companies are listed and are under the Securities Commission.

He also emphasised that PAC was not questioning government policy, but was merely looking at the way projects were being implemented. Only he and PAC deputy chairman, Kepong MP Tan Seng Giaw, have been appointed to the committee. Others are to be named after parliament resumes next week.

The three-term Pulai MP said it was timely for the Auditor-General to look into the corporate governance of Khazanah as "custodians to public invested funds" as his past experience as a Telekom Malaysia Bhd director showed the need for oversight beyond just financial procedures.

Saying he was made a board member based on his credentials as a chartered accountant and council member of the Malaysian Institute of Accountants, Nur Jazlan said, "In 2005, TM wanted to launch the 3G service and the management wanted Alcatel Telecom which did not have commercially deployed 3G equipment while other companies like Ericson and Hua Wei already had.

"As TM’s audit committee chairman, I suspected irregularities in the procurement process and wanted the board to investigate it.

“And I quit as the audit committee chairman after the irregularities were not investigated.”

Two years after Nur Jazlan quit the board, the United States Justice Department indicted Alcatel for bribery and giving kickbacks to Telekom executives.

“So I took a huge risk. I resigned, but two years later, it proved my decision was right,” he said.

The no-nonsense politician, now dubbed ?AC man’, said he wants to create the idea of the ?ear of being audited’ as previously no one feared being audited as they would not be held accountable.

“PAC and Auditor-General’s Department work hand in hand. The AG is trying to change their method from a value for money audit to performance audit.

“Currently, government officers who had committed offences were not afraid as nothing is being done to them. There is no accountability. So what the Auditor-General’s Department is doing is to go with performance audit with the aim to change that culture,” Nur Jazlan added.

He also said besides fraud and corruption, most of the expenditure wastage was due to poor planning.

"For example, when a department wants to starts a highway project, but the company has yet to acquire all the lands along the route. Hence, where there is a delay, it would eventually be a liability to the government. It is poor planning and execution,” he said. – September 21, 2013