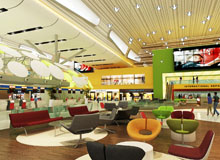 Speaking candidly to DFNIonline at the recent Tax Free World Association Asia Pacific conference and exhibition in Singapore, MAHB general manager of commercial services Puan Faizah Khairuddin outlined the reasoning behind last week’s decision to delay proceedings. She said: “Our contractors were committed to delivering by June 28, but our project team went in and highlighted through their observations and analysis that there was no way we could open on time.

“For me, it was also clear there was no way the commercial facilities would be ready [by June 28] because we have not even obtained the handover date. Without this there can be no commencement.”

The likes of Shilla Duty Free, Nuance-Watson Asia, Heinemann Asia Pacific and LS Travel Retail, all of which were due to begin operating at klia2 next month, were immediately informed of the delay, according to Faizah. “A letter was written to all retailers informing them of the news. We told them that we needed to revert back to the stakeholders and contractors to determine a more suitable date, which we are in the process of doing.

“The next step is to communicate the handover date to the retailers who will have ample time for fit-out before the commencement.”

Regarding a new date for the opening Faizah said: “It would suit everyone if it was this year, but we are not able to commit to anything just yet.”

The delay has been met with understanding by retailers chomping at the bit to begin operating at the new low-cost facility. “The retailers have responded well to the news. We don’t want to announce losses and damages later so the earlier we inform them [of the delay] and engage them for the subsequent opening date the better for everyone. I would really like to emphasise that we will not be unreasonable and give ample time for fit-out and readiness before the commencement.”

“We now have more time to work with retailers on the concept and design and are also able to fine-tune the product and brand mix,” she concluded.