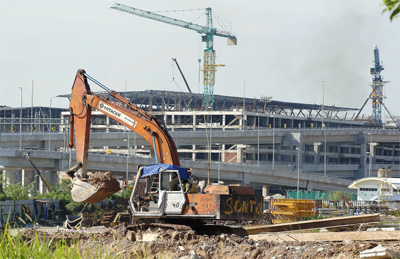 In progress: MAHB has not given a new date for the klia2 but analysts reckoned the opening could be postponed to year-end or even early next year.

The reason given by MAHB this time was that some of its contractors were facing difficulty in meeting the June 28 opening date.

The terminal building, in terms of physical structure, is about 95% complete, but the operating systems have not been put in place and the commissioning will take up to three months.

MAHB has not given a new date for the opening of klia2 but analysts reckoned it could be postponed to year-end or even early next year.

The delay is not favourable although it is unavoidable as MAHB is dependent on the contractors to deliver a fully-functional airport, according to someone in the know.

The price fall was largely due to concerns that there would be cost overruns from the RM4bil figure bandied about as the construction cost for the new airport. But those in the know claimed that this figure included a small buffer for incidentals, like the delay.

“The major jobs have been done and any cost could be purely for administrative or consulting fees,” said a source.

Cost overruns aside, experts were also keen to know if MAHB would be seeking damages from the contractors for the delay.

This is something MAHB needs to clarify. Its officials are expected to meet the contractors this week to iron out issues and possibly set a new date for the opening.

Maybank Investment Bank Bhd analyst Mohshin Aziz said in his note that he was not surprised by the delay.

“We think that the market has already priced in this risk and mammoth projects such as the klia2 often encounter unforeseen challenges, and delays are normal.

“From our last airport visit, we noticed that there were some minor construction works ongoing, but we didn’t think it was a major concern. We are more concerned about the time required to conduct the operational readiness and airport transfer process, which can take four to six months,” Mohshin said.

He is of the view that klia2 may open between October and December, adding that AirAsia Bhd was right in expecting a delay and not making arrangements to move to klia2 this year.

Affin Research said it was “slightly disappointed, as management had until recently guided its commitment to complete within the deadline”.

“In view of the delay, we believe there would likely be some cost overruns tagged to it,” Affin opined.

It added that “while MAHB had secured more than RM1bil of credit facility to fund the remaining construction costs, we would not be surprised if there was a further fund-raising exercise in the near future. To recap, MAHB has a debt covenant of 1.25 times gearing ratio.

“Based on our estimates, MAHB could potentially raise a further RM1.5bil of debt without breaching the 1.25 times gearing covenant (current gearing ratio is 0.7 times).”

It pointed out that MAHB had to maintain a gross gearing ratio of 1.0 time to sustain its AAA rating.

RHB Research analyst Ahmad Maghfur Usman, meanwhile, said, “We view this (announcement) as an indication that MAHB was unlikely to assume any cost overruns since the delay was not due to variations in the terminal’s design and the contractual terms are fixed.”

He added that there was a possibility of the airport operator getting approval for a tax relief totalling RM1bil from its investment tax allowance, and also a potential extension to its airport concession.