These airlines are in talks with MAHB, he told reporters after Transport Minister Datuk Seri Kong Cho Ha’s site visit to klia2 yesterday, adding that those interested will make the necessary announcements "when they are ready".

"At the moment, the biggest operator of klia2, of course, will be AirAsia and we already have at the low-cost terminal right now, Cebu Pacific, we’ve got Tiger Airways; of course these airlines will move to klia2. If new low-cost airlines come up and they want to operate from klia2, they are most welcome to do so.

"For now, whatever is operating out of LCCT, will move to klia2. But from now until then, if any new airlines are established, any new low-cost carriers come up in the region and want to operate out of klia2, they are most welcome," he said.

According to Bashir, klia2 is on track for completion in April next year and the cost is still within the budget of RM3.6 billion to RM3.9 billion.

On AirAsia’s long list of requests to MAHB, including a dedicated catering facility at klia2, Bashir said the airport operator is constantly in discussions with the airline during its weekly meetings.

Last December, AirAsia had asked for written assurance from MAHB that the airport and aeronautical charges remain at current levels if the budget airline were to relocate its operations to klia2. 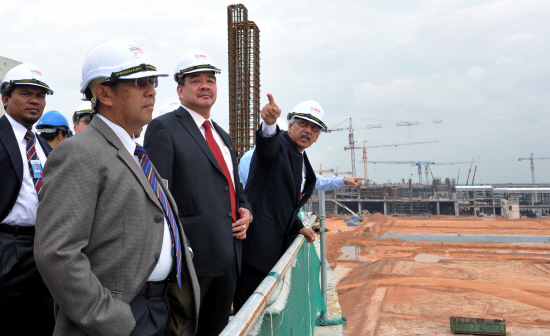 Bashir (right) briefing Kong (beside him) on the progress of klia2 during a site visit yesterday.

It had also demanded that MAHB sign a service level agreement (SLA) with it, which will formally define the level of service MAHB is to provide at klia2, before it agrees to move to the new terminal.