AIRASIA group chief executive officer Tan Sri Tony Fernandes has given the greenlight for AirAsia, Asia’s largest low-fare, no-frills airline, to move to the klia2 low-cost carrier terminal upon its completion next year. 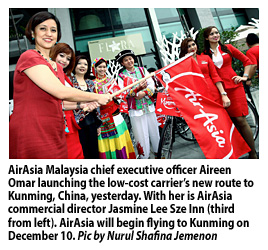 Scheduled to open in April next year, the low-cost terminal has a retail space of 32,000 sqm and can accommodate 225 retail outlets.

Fernandes, who is also the carrier’s single largest shareholder at 24.26 per cent, wrote in a tweet that the move will make AirAsia stronger.

The flamboyant billionaire’s tweet caught many by surprise as the carrier had been bickering with Malaysia Airport Holdings Bhd (MAHB) for months over airport charges.

"MAHB is working hard to make the new airport comfortable for passengers. Looking at our new terminal in klia2. Looks cool. Be ready in April. Will make us stronger. We (will) move in as soon as (it is) ready." he wrote in his tweet yesterday.

Fernandes also tweeted that he had been briefed by AirAsia Malaysia chief executive officer Aireen Omar on the new terminal.Aireen confirmed to Business Times yesterday that AirAsia will move to klia2 when the new terminal is ready.

Instead, Airasia said it intends to float a 20 per cent stake in PT Indonesia AirAsia to raise as much as US$200 million.

Fernandes has also been busy building up his own shareholding in Airasia. This month alone, the tycoon had bought some 55 million AirAsia shares from the open market.