Too much money is being spent to build klia2 on swampland, says DAP's Tony Pua.

Escalating costs and the choice of an inferior construction site to build the low-cost terminal klia2 has prompted a DAP MP to call for heads to roll.

Speaking to reporters at a press conference here, he said that Transport Minister Kong Cho Ha needed to take responsibility over the matter.

Pua added that Malaysian Airports Holdings Bhd (MAHB) had offered no explanation why it chose an inferior construction site. 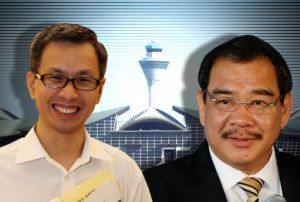 The PJ Utara MP slammed the airport body for building klia2 at its current western site, despite it being identified in the 1992 KL Masterplan as a peat swamp.

Reading from the masterplan, Pua said: “The western part of the site comprises saturated marine clays with an overlay of peat material.”

“(The site) has poor bearing qualities, it is not suitable for airport construction without undertaking significant engineering measures to improve load bearing capacity,” he told reporters here.

Pua then said that this detail was conveniently left out of the 2008 National Airport Master Plan (NAMP). 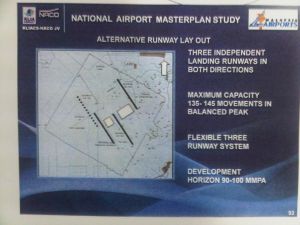 This, he added, led to the site shift from the originally intended KLIA North, resulting in klia2′s purported massive cost overruns.

Announced in 2009 by the Transport Ministry, the RM2 billion klia2 project was supposed to have been completed by September last year.

However, the project’s costs have shot up to RM3.6 billion, with MAHB estimating a 2013 completion date.

According to its website, MAHB appeared to consider the 1992 plan as outdated.

It added that a “comprehensive and detailed study” (including that of soil conditions) have been completed.

Showing reporters a copy of the NAMP, Pua said that KLIA’s western site (also known as KLIA West) allowed for one more independent runway than KLIA North, thus able to service more passengers in the future.

The NAMP, he added, was provided to a body known as the Steering Committee on Airport Management comprising various government officials (including the Finance and Defence Ministries) and airline chiefs (FlyFirefly, MAS, etc) – on April 15, 2008. 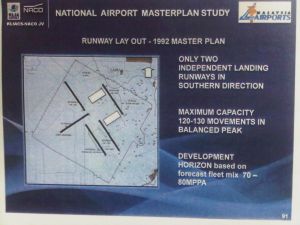 Pua also appeared confused as to why MAHB would suggest KLIA West, when it supported KLIA North as early as 2007.

He then showed reporters a copy of a July 6, 2007 presentation made by MAHB to the Finance Ministry.

“The government must explain why is it that within a few months… the best site… can be shifted from KLIA North to KLIA West,” Pua said.

Asked why MAHB went for the site shift, he added: “My speculation is that it costs more.”