AirAsia Malaysia CEO says the decision will be based on whether the new airport is safe and functional and can facilitate the carrier’s low-cost operation.

AirAsia Bhd, Asia’s largest low-cost carrier (LCC), remains coy about a move to klia2, the new LCC terminal due to be completed in seven months.

AirAsia Malaysia chief executive officer Aireen Omar said the decision will be based on whether the new airport is safe and functional and can facilitate the carrier’s low-cost operation.

"In order for us to be able to move there, we need to work closely with Malaysia Airports Holdings Bhd to ensure that the klia2 move facilitates our low-cost model," she said in an interview recently.

However, there are other ways that AirAsia can manage itself should the new airport prove unsuitable for its low-cost model, she added.

Aireen said the carrier has 16 hubs in the Asean region but declined to elaborate on the possibilities of AirAsia relocating its Malaysia operations to one of its regional hubs.

"There are always other ways. It is not like it’s the end of the world for us and that we cannot operate at all," she added.

AirAsia has five hubs in Malaysia, three in Thailand, five in Indonesia, and one each in the Philippines and Japan. 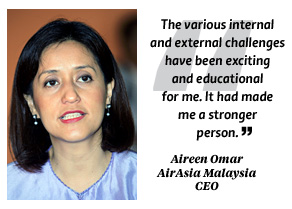 She assumed the post on July 1 after Tan Sri Tony Fernandes moved to Indonesia to focus on regional expansion plans.

"The various internal and external challenges have been exciting and educational for me. It had made me a stronger person," she said.

Since LCC is the engine of new growth in terms of passenger traffic in Asean, Aireen said her aim is to strengthen AirAsia’s routes connectivity in the region as well as ensure that productivity continues to increase.

Most importantly, she wanted to make sure that air travel remains affordable by ensuring that the low-cost carrier’s operational cost remains low.