Malaysia Airport Holdings Bhd (MAHB) had recently announced a fourth addition to its series of delays and cost revision to Kuala Lumpur International Airport 2 (klia2), arousing further concerns on the viability of the large-scale project. 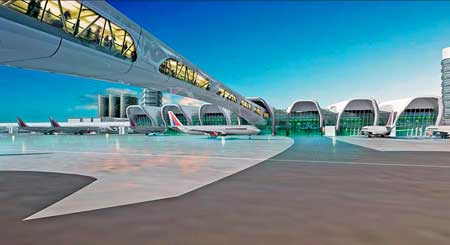 GRAND, BUT AFFORDABLE: Photo shows an artist’s impression of the planned klia2. The updated plan will propel the terminal from being ‘low cost’ to a ‘full service’. It will also allow klia2 to remain commercially viable while retaining the comfort levels of a greater functional terminal.

Maybank Investment Bank Bhd (Maybank Investment) stated in its research report that MAHB could not afford to delay the project completion date beyond mid-2013, as the cashflow burden would ‘eat’ into its cash reserve.

The updated plan would propel the terminal from being ‘low cost’ to a ‘full service’. It would also allow klia2 to remain commercially viable while retaining the comfort levels of a greater functional terminal.

The report marked RM4.2 billion as the cut off point for the project, noting that any higher capital expenditure would render the project unattractive with an internal rate of return (IRR) below 11 per cent.

The project’s newest revised project cost of RM3.9 billion had already gone beyond the RM2.5 billion that Maybank Investment estimated under the original plan. One of the key changes was the terminal building which had been revised to be 71 per cent larger in terms of floor space.

Thus, Maybank Investment took a positive stance on the planned bigger terminal capacity of 45 million per annum, believing this full capacity could be reached within nine to 13 years.

“This is a conservative projection as KLIA and the Low Cost Carrier Terminal (LCCT) had been proven to see robust air travel, even amidst major recessions,” it viewed on the change, which added RM420 million to the cost of the project.

The newly-revised plan incorporated the segregation of domestic and international travellers and adapted an automatic baggage system to accommodate the massive 45 million passenger capacity.

Maybank Investment believed that MAHB’s move to increase the number of aircraft stands from 50 to 76 would go a long way towards attracting airlines, currently unable to go to the LCCT due to the congestion. The addition would cost the company another RM160 million.

“The additional earthworks at klia2 incurred the biggest bill in capital expenditure, amounting up to RM670 million,” observed Maybank Investment.

A 131-per cent increase in ground area would bring about materially larger working area for the airport. MAHB had stated that this would be used to house aircraft maintenance hangars, cargo facilities and airline offices, not forgetting an integrated complex for retail.

The longer runway C, which caused MAHB RM180 million, was deemed unnecessary by Maybank Investment, saying that it was ‘redundant and added no value,’ as AirAsia Bhd’s (AirAsia) fleet type only required 3,000 metres instead of the expanded 3,960 metres.

MAHB’s decision to equip klia2 with 80 aerobridges (costing up to RM120 million) was in conflict with AirAsia’s determination to eliminate non-value add cost wherever possible. The airport management would charge RM85 per use meant that it would have to achieve an average of more than six usage per day to have a decent payback period of below eight years.

Maybank Investment, however, concurred with the management that aerobridges would have a fundamental role at klia2 but achieving decent utilisation rate would be an uphill climb, seeing that AirAsia would be the anchor tenant.

“We think that the best trade off is to reduce the number of aerobridges by half, to 40,” it added.

Looking at the big picture, Maybank Investment believed that the project remained feasible at an attractive 22-year IRR of 13.2 per cent with a net present value of RM6.08 billion. It was expected to be cash-flow positive from its first year of operations with a projected earnings before interest, tax, depreciation and amortisation (EBITDA) of RM266 million.

“On a net income level, we estimate that klia2 will be loss making for the first three years of operations due  to high depreciation effect,” it assumed.

MAHB’s ability to complete the project by April 2013 remained in the dark as the ‘eleventh hour’ announcement on the elongation of runway C raised the research house’s doubts. Should the project cost hover within MAHB’s guidance of RM3.6 billion to RM3.9 billion, Maybank Investment believed the project would remain viable.

Earnings for the company in 2013 had been cut by 33 per cent, amidst the latest updates, though Maybank Investment expected EBITDA to achieve year-on-year growth, signifying the good state and health of the company.