AirAsia Bhd wants Malaysia Airports Holdings Bhd (MAHB) to implement its requests. If these requests are not implemented, its operations at the new low-cost carrier terminal (LCCT), klia2, will be negatively impacted, the company says.

“At the current LCCT, what MAHB gave us is only conditions of use (as an agreement) and it is a useless piece of paper with no contract executable.

“As a public listed company, how can you not have a service agreement? AirAsia can be a victim here, as they can charge any rate at any time,” Lee told a press briefing yesterday.

Ashok Kumar, AirAsia regulatory issues and infrastructure development regional head, said despite a request for a SLA from MAHB from over a year ago, there has been no response from the airport operator.

MAHB currently has conditions of use (CoU) agreements with its airline partners and ground handlers at KLIA. The CoU provides guidance on the use of airport facilities, particularly with regards to the safe and secure use of the airport, as well as a schedule of airport charges.

MAHB has responded positively to AirAsia’s request for a SLA and welcomed AirAsia’s input on the matter (see table).

AirAsia has asked for a full and parallel taxiway to Runway 2 that can save the airline some RM40 million in additional fuel costs yearly.

“The current design of the klia2 now requires us to cross runways. We burn RM40 million [annually] in extra fuel just for this and we would have to absorb this cost,” AirAsia management pilot Captain Fareh Ishraf Mazputra said. 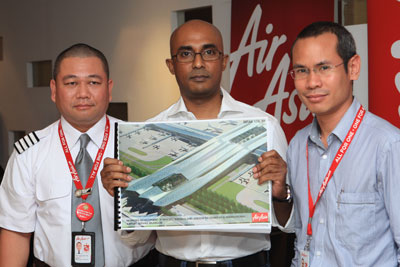 (From left) Fareh Ishraf, Bo and Zaman show the airline’s proposed development of the new LCCT and associated works at klia2.

He said although there is provision for a full and parallel taxiway to Runway 2 under the klia2 project, it will not be ready when AirAsia moves into the new terminal come 2013 as it will only be developed at a later stage. Airlines operating out of klia2 will have access to both Runway 2 and Runway 3 come April 2013, while those at the main KLIA terminal will utilise Runway 1.

Lee said had MAHB agreed to set up a joint committee with AirAsia, the airport operator could have avoided the ballooning of costs of klia2 as all the requirements made by the airline would be met from “day one”.

AirAsia chief operating officer Bo Lingam said, for instance, one of the requests was to build the klia2 at a different site, which would have resulted in a cheaper but more efficient airport.

“We have outlined the detailed requirements and done costing at a site we had chosen, and it would only cost RM700 million,” he said, adding that there are now concerns over higher aeronautical charges because of the costlier klia2.

“Our operational requirements do not need aerobridges. We don’t need all that [the additional specifications of the new klia2]. The airport we suggested back then was ideal,” said Bo. He also claimed that the airline had written to the Transport Ministry about its requests.

MAHB had said earlier that the increase in the cost of klia2 cost will not translate into higher aeronautical charges, which are heavily regulated.

The briefing held by AirAsia yesterday came in the midst of a war of words between AirAsia and MAHB since the unveiling of the new and costlier RM3.9 billion klia2.

The disagreements between MAHB and AirAsia escalated after the latter launched a campaign to encourage its customers to say nay to MAHB’s move to increase airport charges. What is interesting about this spat is that fresh information about the development of klia2 is being unveiled in the process.

On Monday, AirAsia issued a press statement to refute claims made by MAHB that it had asked for a bigger airport and said it should not be blamed for the cost of constructing klia2, which had nearly doubled from RM2 billion to RM3.9 billion.

One of the key arguments involves the implementation of a fully-automated baggage handling system (BHS) at klia2, as AirAsia wanted a semi-automated system.

An airline official said yesterday the decision on the BHS, just like the provisions for A380 aircraft at klia2, was made unilaterally by MAHB.

To add insult to injury, Fernandes said in a twitter feed yesterday that the argument unveiled by MAHB on the BHS was “fake”.

It is important to note that material changes to the BHS was one of the main reasons behind the further delay of the completion of klia2. The project will now be operational only by 2013.

Despite the later projected completion of klia2, AirAsia officials said no decisions have been made yet on more aircraft deferments due to the delay.

This article appeared in The Edge Financial Daily, December 7, 2011.