It’s not just about art, food and culture when you visit a country. Some of the fun, intriguing ways of discovering a country is by participating in its festivals. These festivals can be mystical, whacky, charming or downright weird but you are assured of bragging rights for participating in a truly unique experience.

A world of fiestas:

Arguably, the most colourful festival in the world, Holi is a spring festival that also celebrates the triumph of good over evil. Steeped in religious mythology, the festival commemorates the death of Holika who tried to kill virtuous Prahaladha by coercing him to step into a fire with her. She was invincible to fire and deceived the boy by promising no harm from the fire.

By God’s grace, Prahaladha was saved but Holika was burnt to ashes.

The festival is celebrated between late February to early March in many parts of India with celebrants throwing coloured powders and water at each other. Check out www.holifestival.org for more information.

Celebrated in the third week of January in Panay Island, this festival honours the infant Jesus, although the origins are pagan. In the 13th century, the Ati people who inhabited the island sold a piece of land to a fleeing group of chieftains from Borneo. 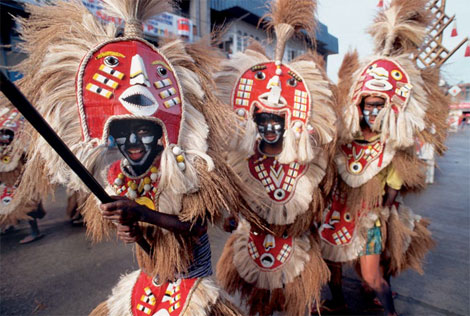 Later, the Ati people sought these newcomers for help as their own harvest had failed them. In gratitude, they sang and danced.

A friendship was forged and the newcomers who had settled in Maraynon painted their faces black in honour of the Ati people.

Nowadays, the festival is a mix of music, street dancing and amazingly creative masks, costumes and body painting. Check out www.philippines.hvu.nl for more information.

From the top of the hill a round of Double Gloucester cheese is rolled, and competitors race down the hill after it on the last Monday of May.

The first person over the fi nish line at the bottom of the hill wins the cheese. You may think this is easy, but spectators and racers have been knocked down senseless by the seven pound cheese during a race.

There is no documentation of its origins but it is believed to be 200 years old (the event, not the cheese!). Check out www.cheese-rolling.co.uk for more information. 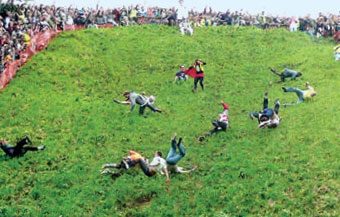 The Tomatina is the biggest food fight in the world and, the messiest too! Held on the last Wednesday of August in the tiny town of Bunol in Spain, this festival draws a huge crowd.

The history of the festival is obscure, but it may be that in 1945, when a parade of enormous figures with grotesque heads (gigantes y cabezudos) was passing through the streets of Bunol, some youngsters joined in the parade and accidentally knocked over one of the ‘giants’.

The angry person wearing the giant outfit got to his feet and started swinging out at everyone around him. 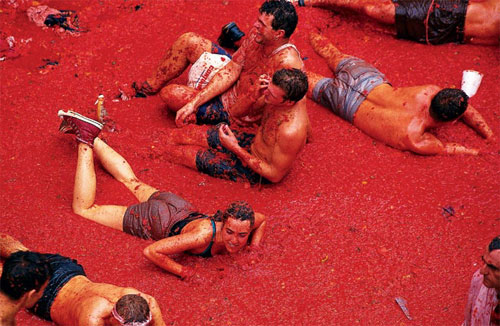 The youngters then grabbed some tomatoes from a nearby vegetable stall and started pelting him with tomatoes until the police arrived to break things up.

The following year, these young people returned to the town hall square and started another tomato fight using their own tomatoes. Check out www.tomatina.net for more information.

Exhilarating but dangerous, men gather on the streets of Pamplona from 6th to 14th July and try to outdo a rampaging herd of bulls. 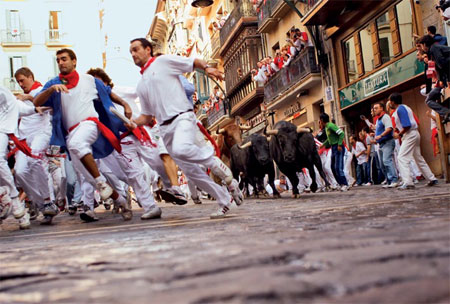 Also known as Fiesta de San Fermin, in honour of the patron saint of Navarra, the purpose of this event is to transport the bulls from the off-site corrals, where they had spent the night, to the bullring where they’d be vanquished by a matador the next day.

No clear evidence of the origins of the run is available but it is believed to have started somewhere in the early 14th century and is an amalgamation of religious festivals and bullfighting.

The Songkran festival of Thailand celebrates life and the wealth water affords. Held in mid-April, Songkran is the Thai New Year celebrations and is believed to have originated from India.

In the beginning, the ‘water throwing’ act was a ritualistic cleansing of statues of Buddha to mark the advent of the new year. Holy water was also lovingly sprinkled on elders as a sign of respect.

Nowadays, it is a battle zone with foreigners joining the locals in ‘shooting’ each other with the biggest, baddest water guns! 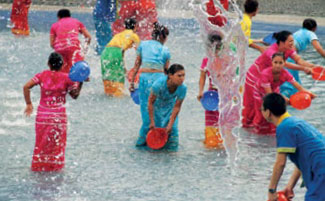 It’s actually a great way to cool off from the hot searing heat of summer in Thailand. Check out www.tourismthailand.com for more information.