The Maju Expressway (MEX), formerly known as the Kuala Lumpur-Putrajaya Expressway (KLPE), begins from the Kampung Pandan interchange and terminates at the Putrajaya Link Interchange.

The expressway become as a backbone of the Multimedia Super Corridor (MSC) area.

The much anticipated national infrastructure project, the Maju Expressway (MEX) that links Kuala Lumpur to three prominent locations of the country, Putrajaya, Cyberjaya and Kuala Lumpur International Airport, opened its “doors” on schedule to road users on 13 December 2007.

The new Maju Expressway bridges Kuala Lumpur and Putrajaya, and connects you to Kuala Lumpur, Putrajaya, Cyberjaya and KLIA within minutes of each other!

MEX offers road users a shorter and more direct route to destinations once quite a distance away and clogged with traffic.

The expansion of Putrajaya, Cyberjaya, and the KLIA together with this new major expressway will in turn stimulate further commercial and residential developments in the southern corridor of the Klang Valley.

With the expressway, what used to take an hour or more to reach during peak periods from KL now only takes an estimated 20 minutes to the Federal Administrative Centre in Putrajaya and 30 minutes traveling time to the Kuala Lumpur International Airport (KLIA) and KLIA2 at Sepang. 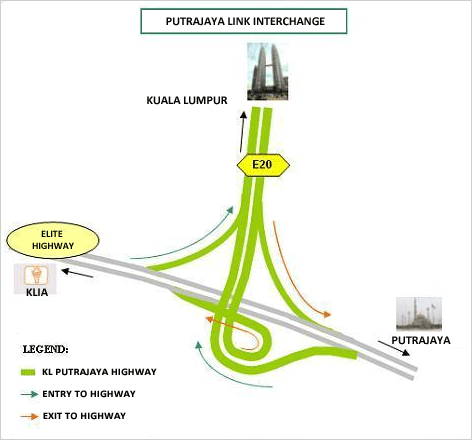 MEX Ronda patrols the Expressway round the clock to provide assistance to distressed users, attending to emergencies and for traffic control.

The whole stretch of the Expressway and interchanges are fully lighted for the convenience and safety of motorists travelling at night.

Emergency telephones at an interval of 2km installed at the shoulder of both bound along the Expressway which is directly link to the traffic control centre at the administration building. The emergency telephone is meant for motorists to report or request assistance for any emergencies.

Closed Circuit Television (CCTV) at all interchanges and Rest and Service area to monitor traffic flow and surrounding areas.

Variable Message Signs (VMS) installed along the Expressway at strategic locations to provide information on the status of traffic flow and other information to motorists.