This was a move that market watchers say was bound to happen as the Perikatan Nasional (PN) government continues to replace those (including professionals) appointed by the previous Pakatan Harapan (PH) administration — a process that has been accelerated in these uncertain times.

No reason was given in the company announcement for the change, except that the cessation was immediate in that Zambry, who is Pangkor assemblyman, was named to succeed Zainun.

While Finance Minister Tengku Zafrul Abdul Aziz was recently reported as saying that the political appointees provide “check and balance” and ensure firms operate in line with the government’s aspirations, the leadership change at MAHB has set off questions about its timing as well as the potential derailing of plans that had been put in place.

For one thing, the airport operator is in advanced talks with multiple government agencies, including the finance and transport ministries, the Malaysian Aviation Commission and the Public-Private Partnership Unit under the Prime Minister’s Department to finalise its four new operating agreements. The OAs would enable MAHB to execute a commercial development plan that is more viable and sustainable moving forward, while increasing the government’s income through a profit-sharing mechanism on the land owned by the government, but developed by MAHB.

Talks between MAHB and the government, then under the PH coalition, had begun as early as 2018, which saw the previous two OAs signed on Feb 12, 2009, being replaced with four new OAs — one for the Kuala Lumpur International Airport (KLIA) (including klia2), another for designated airports in Peninsular Malaysia, and one each for airports in Sabah and Sarawak. It also saw the extension of the tenure for MAHB to run the 39 airports in the country for 35 years until Feb 11, 2069. The only thing left to be done is ironing out the finer details of the OAs.

According to people familiar with the talks, there is a total of 32 items to be discussed, more than half of which have been settled. One of the items outstanding is to obtain the government’s consent to tweak the leases of the land surrounding KLIA to 99 years, which would be more appealing to long-term investors.

In its statement last Tuesday (Aug 11), MAHB acknowledged that Zainun had been instrumental in the discussion of the airport operator’s new OAs with the government, which, according to sources, are expected to make their way for Cabinet approval in September and concluded by year-end.

The ongoing issue of the implementation of a regulated asset base (RAB) framework, which sets aeronautical charges such as the passenger service charge (PSC) and aircraft landing and parking fees based on the facilities and expenditure required of an airport, is also expected to be firmed up by year-end, the sources add.

The move to equalise the PSC for non-Asean international flights at klia2 with those at other airports in Malaysia, that is, from RM50 to RM73, had been a contentious issue in the past in the implementation of the RAB. AirAsia Group Bhd and its long-haul affiliate AirAsia X Bhd (AAX), the largest tenants of klia2, are against the equalisation, as they maintain that the airport facilities there are not on a par with those of KLIA.

“Zainun had successfully moved talks forward with all stakeholders on the OAs. It would have made better sense to let her see through the discussion and serve out the full tenure of her contract to January 2021. What’s the hurry to replace her?” a source points out.

Challenging road ahead for new chairman

The next chairman of MAHB will also face the unenviable task of returning the firm to financial health after it reported a net loss in the first quarter ended March 31, 2020 (1QFY2020) — its first quarterly loss since the quarter ended December 2015.

Like the rest of the travel industry, MAHB has been hit by border closures, travel restrictions and lockdowns. It posted a net loss of RM20.39 million in 1QFY2020, compared with a net profit of RM149.58 million a year ago. Analysts are expecting worsening results in 2QFY2020 when the full impact of the Movement Control Order on the group’s performance is felt and international borders remain closed.

Air passenger traffic at the 39 airports that MAHB operates in the country has also dropped 66% in the first seven months of 2020 to 20.53 million, from 60.36 million in the same period of 2019, as demand for air travel plummets in the wake of the Covid-19 pandemic. Traffic at its Istanbul Sabiha Gokcen International Airport in Turkey also fell 56.4% to 8.88 million passengers in the period, compared with 20.36 million passengers a year ago.

Analysts are anticipating traffic to start normalising only when a vaccine for Covid-19 is found, possibly in early 2021.

Meanwhile, sources estimate that MAHB is burning through RM130 million in cash each month. As at end-March 2020, it had RM971.33 million in cash reserves, which should be able to sustain its operations for one year. Its net debt position stood at RM4.9 billion, with borrowings totalling RM5 billion.

Nevertheless, analysts believe MAHB will be able to survive the cash crunch, as it had recently secured a RM1.7 billion revolving credit facility from several banks. It is also able to tap the sukuk market to raise RM1.5 billion.

This is in addition to the efforts the company had deployed to cut costs, including deferring RM1.5 billion in capital expenditure, reducing operating expenditure by 20% and negotiating deferment of payments owed to various suppliers.

Sources say, in granting the revolving credit facility, MAHB was assessed based on the people running the company, its operations, business model and existing reserves. “The change of the guard could limit MAHB’s ability to draw down on its revolving line of credit fully. It could also affect foreign investor sentiment on MAHB’s stock,” another source notes. As at April 29, 2020, foreign shareholding in the firm stood at 31.73%.

Zainun, 68, goes down in history as the first-ever female chairman of MAHB. She was appointed on Jan 18, 2019, succeeding Tan Sri Syed Zainol Anwar Syed Putra Jamalullail, who had resigned.

Prior to joining the airport operator, Zainun worked in the legal and judicial service. She was a Federal Court judge from April 2012 to October 2018.

“The incoming chairman (of MAHB) was appointed the menteri besar of Perak when Barisan Nasional was returned to power, as a result of the decision in his case (Datuk Dr Mohd Zambry Kadir vs Datuk Seri Mohd Nizar Jamaludin [2009] 5 MLJ 464) in which I wrote the judgment. Together with me were Justices (Tun) Md Raus (Sharif) and (Tan Sri) Ahmad Maarop. So here we are again. It is one of life’s little ironies, I guess,” she tells The Edge over the phone.

“At the moment, MAHB [faces many] critical issues and it will be great if these are led to their final conclusion — such as the signing of the OAs and related issues.

“Obviously, the dynamics at MAHB can be mercurial, and so one needs a steadying influence. A high degree of vigilance is called for, so that the entire aviation ecosystem is in place. The security, safety and lives of people are also critical and assume greater magnitude,” she says.

“In my view, an important component in governance is the question of integrity. It should begin at the board, for the top sets the tone. Our value system comprises our basic philosophy of justice and good conscience. And while directors can discuss issues with candour, they are also mindful of the need to embrace the full spectrum of integrity and good governance, making compelling arguments for ethics and practicality.” 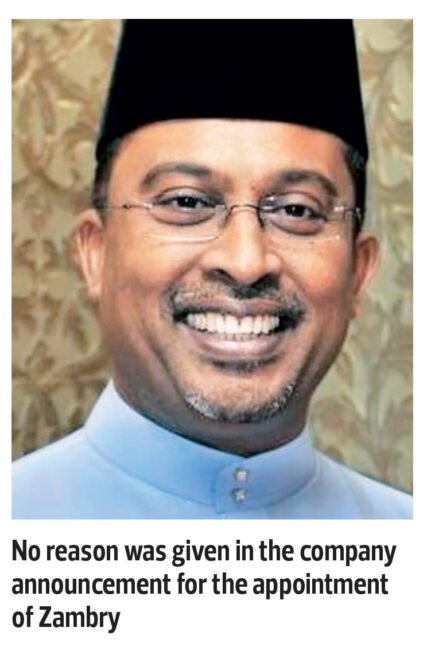 On her leaving the company, Zainun says, “Leaders come and go. A leader, just as an artist, will reflect a view on how to lead and what one can do differently to improve. Some great works of art are notoriously unfinished; just where one work stops, the next begins — perhaps more vibrant, more penetrating and bolder.

“So also in this. My one regret, perhaps one of several, is that some works I have been intensely immersed in, such as the OAs, have yet to see the light of day,” she adds.

“Just as on the Bench we need to deliver justice, as a director and chairman of this company, we must deliver results and profits. And we must be aware that the workforce depends on us. When they look at you as a leader, they are actually asking more of you than what is implied by your job description or title, no matter how fancy your title may sound.

“These employees must live with the successes or failures of our work as a leader. It matters a great deal to me how well one does it, because they will later look at the evidence and forensics and make a conclusion whether the director or chairman label you have should be duly honoured or forfeited.”

In 2014, Zainun was among the three Federal Court judges who dissented from the majority decision to dismiss the Catholic Church’s application for leave to appeal the Court of Appeal’s decision to ban the Herald from using the Arabic word for “God” in its Bahasa Malaysia content. She also wrote the judgment in the landmark cases of Semenyih Jaya Sdn Bhd v Pentadbir Tanah Hulu Langat (2017) and the Indira Gandhi a/p Mutho v Pengarah Jabatan Agama Islam Perak & Ors and other appeals [2018].

Under her tenure, MAHB experienced one of its worst technical glitches that left thousands of passengers stranded due to flight delays in August last year. It also saw the resignation of its group CEO Raja Azmi Raja Nazuddin shortly after.

Zainun’s tenure is also marked by the ongoing legal battle between MAHB and AirAsia and AAX for outstanding passenger service charges (PSC), which then led to the latter filing a countersuit for loss and damages caused by negligence on the part of MAHB relating to provision of services and facilities at klia2. Sources say AirAsia still owes MAHB some RM50 million in unpaid PSC.

With the aviation landscape being completely different from what it was a year ago due to Covid-19, all eyes are now on Zambry as to how he will chart a new path for the company.

Government sovereign wealth fund Khazanah Nasional Bhd holds a 33.21% stake in MAHB, while the Employees Provident Fund Board has 14.63%. MAHB has lost RM4.14 billion in market value since the beginning of this year, representing a decline of 33%. The stock closed at RM5.11 per share on Wednesday, bringing a market capitalisation of RM8.48 billion.