From having just two rows of shophouses in the early days, Nilai has grown, thanks to its location between Kuala Lumpur and Seremban, the capital of Negeri Sembilan.

Nilai’s location bordering Selangor is a boon, as a growing number of people in the state are moving beyond the densely populated Klang Valley.

The town, whose name literally means “value” in Malay, is close to the Kuala Lumpur International Airport (KLIA), klia2, Cyberjaya and Putrajaya, and is easily accessible via the North-South Expressway, Elite Expressway and Lebuhraya Kajang-Seremban (Lekas).

Due to Nilai’s strategic location, easy access and low land prices, VPC Alliance (Malaysia) Sdn Bhd managing director James Wong is confident that property prices still have room to appreciate in the long term. “Investors are expected to move outside the Klang Valley [for] price appreciation in the long term, as prices are still [comparatively lower] in Nilai,” he says.

“Additionally, [the presence of] large developers in Nilai such as Sime Darby Property and PNB Development will boost the confidence of homebuyers and investors, and [is good] for future growth,” notes Wong. He adds that the two municipalities of Nilai and Seremban had merged to become the Seremban City Council in January.

Apart from its industrial segment, Nilai is known for its educational institutions and research centres. The Negeri Sembilan government had made the decision to turn the town into an educational and research hub in the 1990s.

Nilai is also part of the 379,087-acre Malaysia Vision Valley 2.0 growth corridor, which was launched in December 2018. MVV 2.0 master developer Sime Darby Property is developing a 2,838-acre high-tech industrial park in the town.

In December 2019, the company launched the RM520 million XME Business Park at Nilai Impian, comprising 149 industrial factories in two phases spread out on 69.72 acres. The development has a take-up rate of more than 50% for Phase 1 while earthworks for Phase 2 is slated to start in 3Q2020.

Furthermore, Nilai will be the second stop for the East Coast Rail Link (ECRL), Wong says, adding that the station will be located close to Nilai 3 and will provide passenger and freight services.

According to Wong, other ongoing developments in the town include Nilai Impian by Sime Darby Property. Started in the late 1990s, the 1,808-acre township has a gross development value (GDV) of RM4.5 billion and will offer 142 acres of commercial properties, including offices, a retail mall, hotels, educational institutions and a medical centre. The developer launched a new interchange at Nilai Impian in 2015 to improve accessibility.

GD Holdings also has an ongoing development in Nilai. After it completed its first project there, Green Beverly Hills — comprising 368 condominium units and 31 bungalows — in 2010, the company acquired 50 acres in Putra Nilai (previously known as Bandar Baru Nilai) and renamed it Nilai Vision City.

With a total GDV of RM10 billion, Nilai Vision City will comprise a hotel, shopping complex, theme park, international educational hub as well as exhibition and convention centre, to be developed over a period of eight to 10 years.

Meanwhile, PNB Development has been developing Kota Seriemas, comprising townhouses, terraced houses and bungalows with prices ranging from RM200,000 to RM1.5 million. The township has a 10- to 15-year development plan.

Before Nilai became the large town it is today, its first residential development was Taman Semarak by Nilai Resources Group Bhd. The developer, considered to be the main and pioneer developer in the area, subsequently built the 6,233-acre Putra Nilai through its subsidiary BBN Development Sdn Bhd. The company has since developed various properties in the area such as terraced and semi-detached houses, shopoffices, townhouses and apartments. 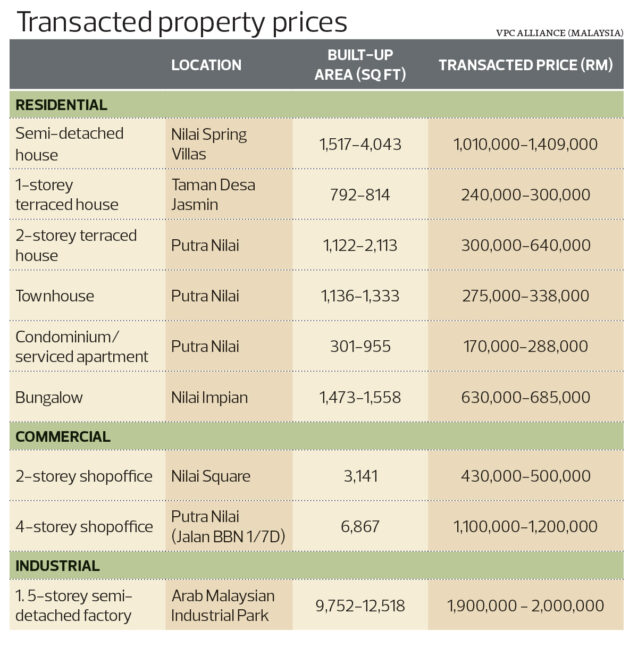 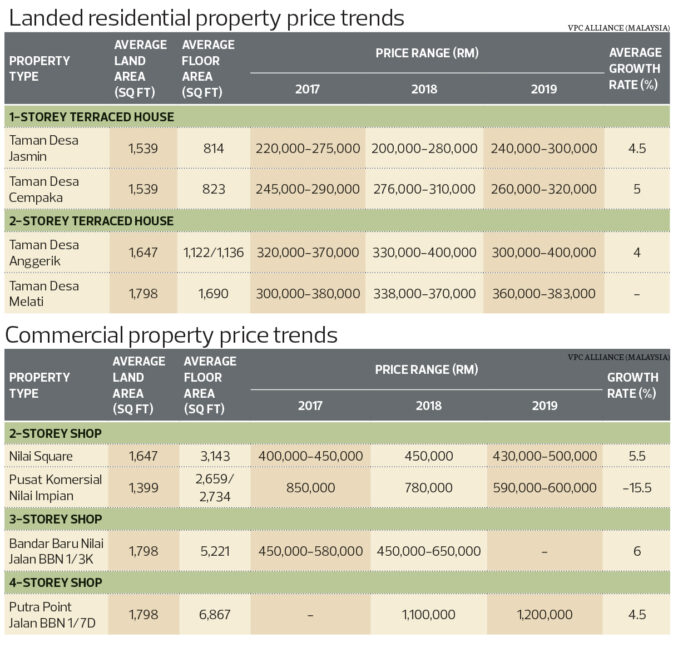 Most of the properties in Nilai are landed, save for a handful of stratified ones, including medium-cost apartments and several new condominiums, says Henry Butcher Malaysia (Negeri Sembilan) Sdn Bhd director Siew Weng Hong.

“Landed properties are better received in Nilai as well as in Negeri Sembilan in general. Nonetheless, stratified properties have become popular among the student population, teaching faculty as well as senior factory employees,” he continues.

According to him, popular terraced housing schemes in the area include Desa Melati and Desa Casia.

VPC Alliance’s Wong says Nilai’s secondary market has been active, with the average residential transacted price in certain locations growing at 4% to 5% per annum.

As for stratified properties, Siew notes that there were very few stratified developments in Nilai 10 years ago, and they were mostly medium-cost apartments such as Desa Jati and Desa Casuarina. Newer condominiums, including Mesahill and Starz Valley in Putra Nilai, were only built four to five years ago, he adds.

“The newer developments generally offer smaller 1- to 1+1-bedroom units because most of the demand comes from a single occupant or [twin-sharing]. These developments were also built to cater for the educational community as they are next to the universities,” notes Siew. He adds that most of these units are owned by investors or parents who bought them for their children.

In terms of commercial properties, Wong says their prices depend on their location, whether they are near shopping malls and hypermarkets.

He notes that shopoffices in Putra Point — the main commercial area in Nilai and also where AEON Mall and the Tesco and Giant hypermarkets are located — that face the main road, such as those in Jalan BBN 1/7D, have seen higher transacted prices, which grow at an average rate of 4.5% per annum. “This is in comparison to shopoffices in quieter locations as the areas with low visibility in Nilai have a relatively low occupancy rate, which would subsequently affect the property prices.” 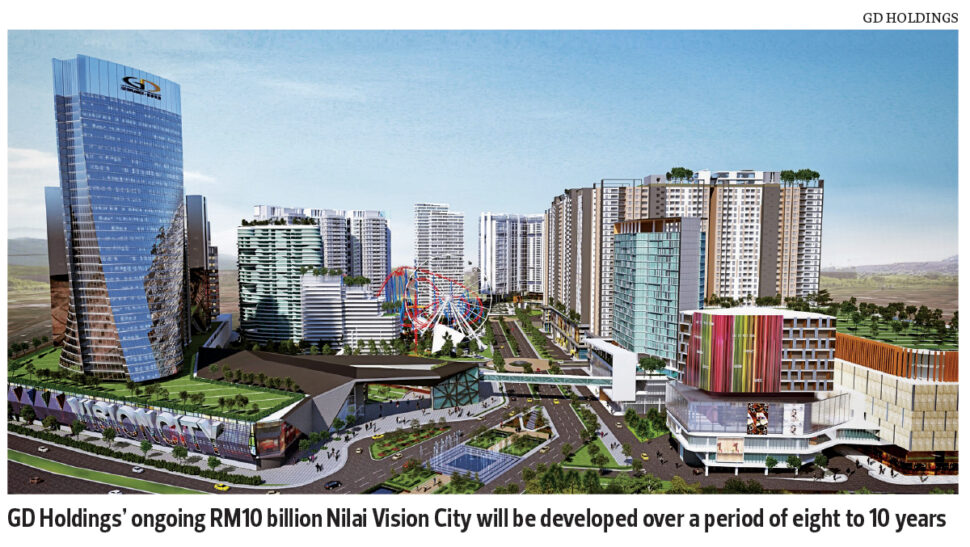 About 1km from Putra Point is the Nilai Square Commercial Centre, whose early phase comprised 2-storey shopoffices occupied by wholesale and retail traders specialising in textile and household products, says Wong. “The occupancy rate [for the phase] is less favourable owing to low business demand.” 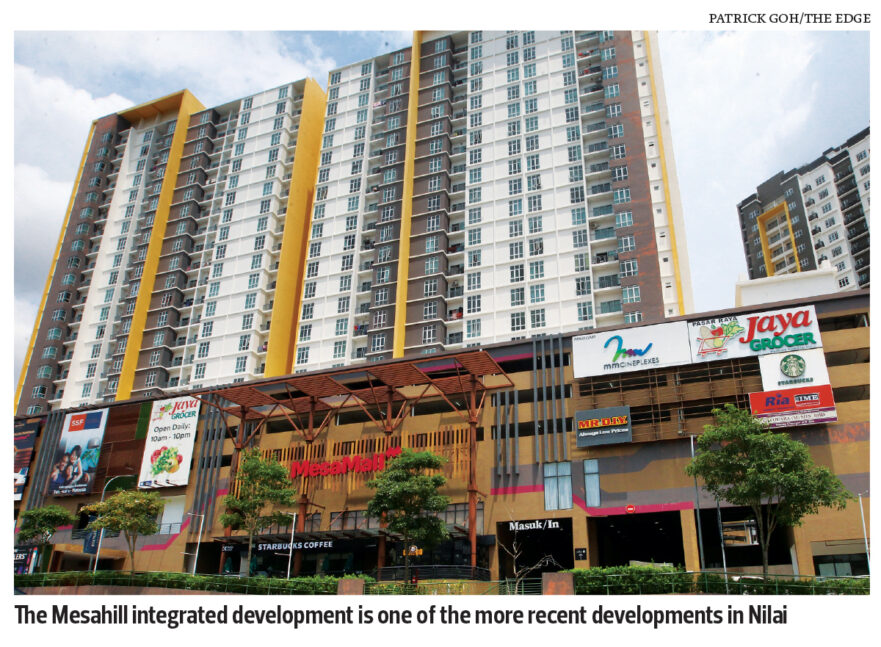 In contrast, Nilai Square’s subsequent phase, which faces the main road of Persiaran Pusat Bandar and is within walking distance of AEON Mall, has a higher occupancy rate.

While Nilai’s property market has softened since 2017, Siew remains confident about its mid- to long-term outlook. “The spillover effect from the Klang Valley has been going on for the last 20 years and Nilai is still getting a lot of positive effects from this,” he says. 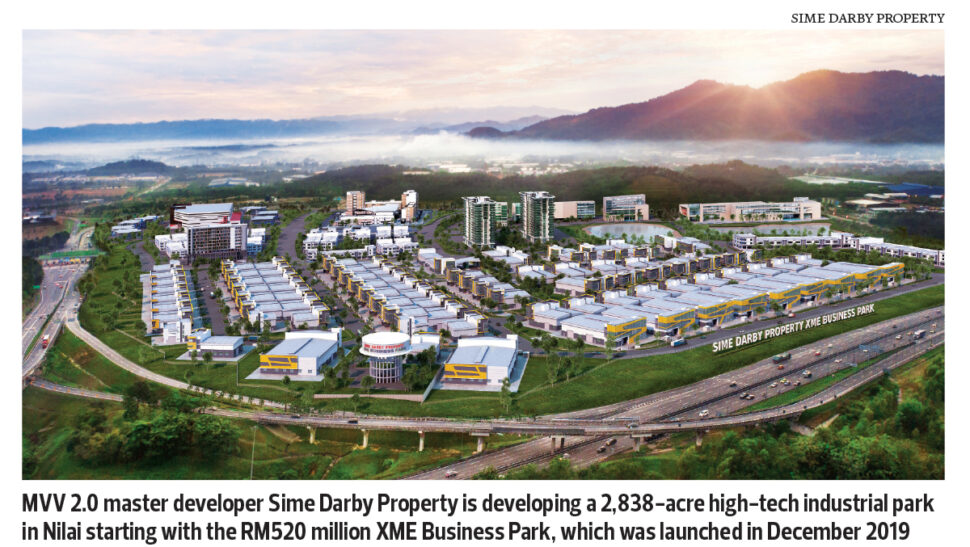 He notes that the two main factors that will bode well for the area are the ECRL stop as well as the MVV 2.0 development. “The only thing the area lacks is public transport infrastructure such as LRT and MRT lines. People living here still have to travel by car for work in the Klang Valley.

“If the ECRL stop and the MVV 2.0 become a reality, they will be good for the area. And if the postponed [Kuala Lumpur-Singapore] High-Speed Rail, which has a proposed station 15km away, is realised, it will definitely benefit the area further,” says Siew.